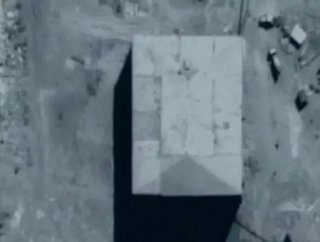 In 2007, Israeli warplanes supposedly destroyed a strategic target in the Syrian desert as part of an on-again-off-again conflict between the two Midd...

In 2007, Israeli warplanes supposedly destroyed a strategic target in the Syrian desert as part of an on-again-off-again conflict between the two Middle East nations. Little was reported on the details of the destroyed target initially; however, now the International Atomic Energy Agency (IAEA) is revealing details claiming that the target was indeed Syria’s attempt at constructing a nuclear reactor.

Apparently, U.S. intelligence reported back in 2007 that the target was a nuclear facility, but the IAEA was not so quick to jump on board with such a claim. IAEA Chief Yukiya Amano has announced today that the evidence points unequivocally to the fact that the facility was a reactor. “The facility that was destroyed by Israel was a nuclear reactor under construction,” said Amano in response to a question from the Associated Press.

Israel has never come forward to respond on the strike, nor claims responsibility for the aerial attack. U.S. intelligence agencies on the other hand openly identified the target as a nearly completed nuclear reactor and stressed the urgency of destroying it since it could potentially produce plutonium for nuclear warheads. Recently released Wikileaks documents reveal the details of the attack, highlighting Israel’s involvement.

Syria officially denies any covert nuclear activity, for either energy or nuclear arms. However, Syria only permitted IAEA inspectors to assess the facility once, just following the bombing, and refused access thereafter. The site was completely leveled and new structures built on top, leading some to fear that the country did have something to hide.

This brings us back around full circle to an interesting quandary. While it is perfectly spelled out in the Nuclear Non-Proliferation Treaty that countries with nuclear capabilities are encouraged to support efforts toward safe nuclear energy generation in developing countries, this is not what seems to be occurring, especially in countries that supposedly harbor terrorists. Granted, secrecy is not acceptable in the pursuit of nuclear energy, and the IAEA is supposed to be granted ultimate authority over inspection and approval of nuclear facilities. Nonetheless, it is more and more apparent that countries not in alignment with the powers at be (i.e. the U.S. and Israel in this case) are blatantly denied access to nuclear energy, even when no proof of weapons development is present.

Just a few months ago, the IAEA confirmed that Iran’s nuclear facilities—which were for years thought to be involved in nuclear weapons development—in fact show no apparent signs of weapons manufacturing, and appear to be solely for energy generation. The U.S. went so far as to warn of a possible war with Iran over this issue. Meanwhile, Saudi Arabia—the home country of the majority of the 9/11 terrorist attack conspirators—is free to seek nuclear capabilities without reprimand and is openly brokering deals with France for nuclear technology. Is no one seeing the irony in all of this? Or is it that we have become so jaded by the international power struggle that we just simply allow our governing bodies to kill innocent people in the name of international security. This is not to say that the international community shouldn’t be skeptical of countries seeking nuclear capabilities, but when there is no concrete proof of weapons development taking place, it seems like a barbaric approach to bomb a facility, resulting in the deaths of several innocent workers. Not soldiers… not terrorists… workers! Like you and me.