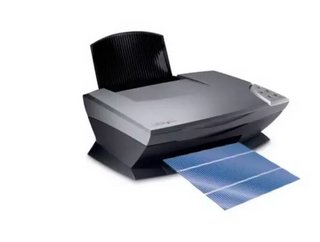 The same technology that has revolutionized the office is now being developed to create low-cost solar cells. The luxury of inkjet printing may be tak...

The same technology that has revolutionized the office is now being developed to create low-cost solar cells.  The luxury of inkjet printing may be taken for granted by some, but it was only a few decades ago that the technology was released to the delight of businesses and academic institutions around the world.  Now, scientists are looking to utilize the convenience and speed of inkjet printing to literally print sheets of solar cells, all while reducing the excess waste common to traditional solar cell manufacture.

Engineers at Oregon State University have been developing the inkjet solar technology, which is capable of creating high performance, rapidly produced, ultra low-cost thin film solar cells.  The engineering team is working with various materials to maximize solar efficiency, including chalcopyrite, also called CIGS for its composition of copper, indium, gallium and selenium.  CIGS has a high light-to-electricity conversion rate.  A one-micron-thick layer of CIGS can deliver the same efficiency level of a 50-micron-thick layer of silicon.

"This is very promising and could be an important new technology to add to the solar energy field," said Chih-hung Chang, an Oregon State University professor in the School of Chemical, Biological and Environmental Engineering. "Until now no one had been able to create working CIGS solar devices with inkjet technology."

The inkjet technology also reduces waste generated in creating solar cells by up to 90 percent. "Some of the materials we want to work with for the most advanced solar cells, such as indium, are relatively expensive," Chang said. "If that's what you're using you can't really afford to waste it, and the inkjet approach almost eliminates the waste."

Thus far, the researchers have achieved an efficiency of five percent.  However, the engineering team believes that 12 percent efficiency is achievable, which would make the inkjet solar cells competitive with standard thin film solar.