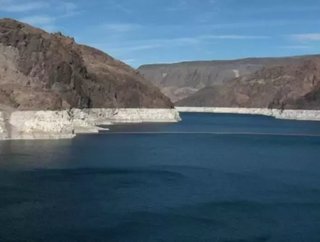 Fears that Las Vegas could run dry are allayed with news that a connection to a new reliable water source is on schedule with a key phase finished thi...

Fears that Las Vegas could run dry are allayed with news that a connection to a new reliable water source is on schedule with a key phase finished this March.

Years of drought have halved the capacity of the lake supplying the desert city, with the threat that the water level could fall below the intake pipe by 2013.

For over two years the race has been on to connect a new tunnel deep through the bottom of Lake Mead, America’s largest reservoir, in a bid to keep fresh water flowing to the city’s two million inhabitants.

Accuracy came down to millimetres when setting the multi-ton inlet structure into the hole blasted through the lake floor ready for the tunnel being dug three miles from the shore.

Helping achieve this pinpoint accuracy, 375 feet deep in the lake, was a Falcon ROV, the smallest underwater vehicle in the Saab Seaeye range.

Operated by AUS Diving for main contractor Vegas Tunnel Constructors, the Falcon helped AUS in the tricky task of making a hole in the lake floor and installing the inlet structure.

AUS Diving’s vice president, Kerry Donohue was impressed that the Falcon has performed tirelessly underwater for over two years, working three to four hours, virtually every day, including a stretch of 12 days, for 24 hours a day. And the company has not lost a moment of time due to the reliability of the Falcon.

“Operating at over 300 feet for long periods we had to try and do without divers,” he explains, “and we found that with proper planning most tasks can be accomplished by the ROV without diver intervention.”

They used the Falcon for a range of key tasks including positioning explosive charges, overviewing rock and sediment removal, monitoring the precise location of the new inlet structure and securing the unit in place.

He describes how the precise placing of explosive charges on the lake floor - specially shaped to focus the explosive energy for blasting through the rock - was critical. By using sonar on board the Falcon, AUS Diving was able to monitor the lowering of the frame that held the charges ready to be set down like rows of bowling pins.

With three blasts a day turning the lake into a pea soup of sediment, the sonar was the only way to check the accurate positioning of the explosive setting frame.

The objective was to create a hole, 30m square and 25m deep, in which a new inlet structure would be secured in concrete.

During the excavation of rock and sediment, the Falcon stayed on the lake floor from where the AUS operators could watch the airlift process through the ROV’s Sonar.

And whenever the airlift blocked and needed ramrod clearing, the operator would send the Falcon over to check that the pipe was free, ready for the evacuation process to continue.

When a clam bucket was needed to lift larger rocks, the ROV also became the eyes of the bucket operator to check that the jaws were open and the operating cables were correctly aligned.

And when a chisel hammer used in the rock breaking process was lost, the Falcon tracked it down.

A vital and challenging task was the exact positioning of the 75 ton guide frame to be set into the lake floor, ready for precisely locating the 1,100 ton inlet structure.

Accuracy to just 76mm (three inches) was needed to position the frame so that the tunnel would find and correctly align with the inlet structure after burrowing for three miles.

To set the precise location of the frame, four buoys were attached by steel cables to the lakebed and later cut free by the Falcon when the task was complete.

To check the exact GPS location a plumb bob was lowered from the surface into pockets from where its exact position inside the pockets was verified by the Falcon.

The ROV also placed and recovered a gyro compass on both the landing frame and levelling structure where it was used to check three dimensional accuracy.

Levelling the frame was also critical. Here the operator used the ROV to watch the levelling bubble as adjustments were made.

During the process of laying cement inside the frame, the ROV watched over the task to ensure that the concrete was filling correctly and level.

AUS Diving has a fleet of three Falcons. They chose this model because it is small enough to be easily manhandled into the water from shore or boat, even a RIB, yet is powerful enough to hold steady and operate in strong cross currents and quickly change tooling and sensors of all kinds.

Rapid tool change comes from the Falcon’s intelligent ‘plug-and-go’ electronics that allow up to 128 different devices to be fitted, including extra cameras, lights, tracking system, manipulator and sonar, plus the option of adding special tooling on a removable skid.

The new tunnel project, costing a total of $700 million, will allow Southern Nevada Water Authority to draw better quality water from a deeper location in the lake that supplies nearly half of the city’s fresh water.

Fed by the Rocky Mountains, Lake Mead has a surface area of 250 square miles, with the Hoover Dam at one end and a number of marinas dotted along the shoreline, and is a designated national recreation area.