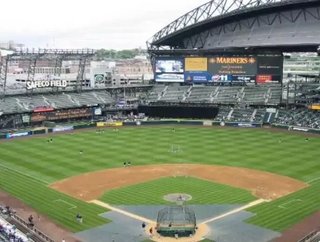 Major League Baseball opens the new season with new solar and wind installations at two of its ballparks. As the first sport to play under lit fields...

Major League Baseball opens the new season with new solar and wind installations at two of its ballparks. As the first sport to play under lit fields and pioneer live television broadcasts, baseball continues to show America that it is still a leader in social and technological change.

The Indians opened this month, revealing an experimental helical structure with four small wind turbines across one of the field's towers, which will generate 25,000 kilowatt-hours of electricity annually. The Department of Energy funded Progressive Field's prototype small wind turbine complex, designed by Cleveland State University. It has a central spiral in an aluminum cage, mounted on a steel platform. The corkscrew looking structure speeds up the rate of wind funneled into the turbines. Near Cleveland's windy lakefront, the turbine's annual capacity is estimated at a high rate of 24,000 kw hours.

The Mariners' Safeco Field boasts solar panels from 168 Panasonic on its parking garage elevator canopy and skybridge. The HIT Double solar panels are expected to provide 10 to 30 percent of the electricity used for lighting, elevator operation and other needs in the parking garage including electric vehicle charging stations. The Mariners have also installed high-efficiency lighting and recycling bins throughout the park.

The Minnesota Twins, the Royals and the Mariners are also turning to more efficient lighting and cooling systems in addition to encouraging fans to recycle the wrappers and containers of their favorite ballpark snacks.