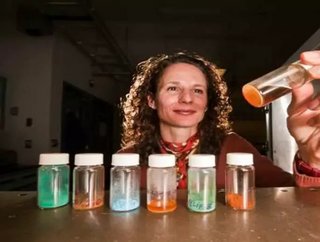 A new material developed from a team of Sandia chemists promotes clean, safe nuclear energy through the removal of radioactive gas from spent nuclear...

A new material developed from a team of Sandia chemists promotes clean, safe nuclear energy through the removal of radioactive gas from spent nuclear fuel. By using metal-organic frameworks (MOFs), radioactive waste is captured and removed—one of the first attempts using a MOF for iodine capture.

The process could also be applied to nuclear fuel reprocessing or in cleaning up nuclear reactor accidents, which is especially important in countries such as France, Russia and India where reprocessing is most common.

Initially studying known materials, such as silver-loaded zeolite, researchers found that various similar frameworks can also trap and remove iodine from spent nuclear fuel. As an expensive metal that also poses environmental problems, the team set out to engineer materials that would work without using silver as well at higher capacities.

"We investigated the structural properties on how they work and translated that into new and improved materials,” said Tina Nenoff of Sandia's Surface and Interface Sciences Department.

Eventually, they found a MOF that was highly selective for iodine and could separate the element from a stream of molecules, resulting in a pore-trapped iodine gas that can then be incorporated into glass waste for long-term storage. After six years of research under the US Department of Energy Office of Nuclear Energy, the team has fabricated MOFs into durable pellets that will soon be commercially available.