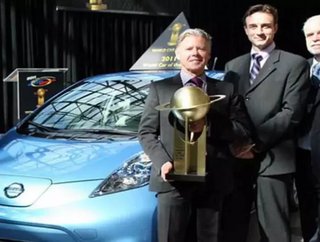 Written By: John Shimku The Nissan LEAF has been making headlines since its debut, and despite electric ignition problems reported earlier this week, t...

The Nissan LEAF has been making headlines since its debut, and despite electric ignition problems reported earlier this week, the car has received the coveted 2011 World Car of the Year award Thursday at the New York International Auto Show. The all-electric LEAF beat out the two other finalists—the Audi A8 and BMW 5 Series. This marks the first time an all-electric vehicle has won the award.

"It is a great joy that the world's first, mass-marketed electric vehicle, the Nissan LEAF, has won the prestigious award of 2011 World Car of the Year," said Nissan Chairman and CEO Carlos Ghosn. "This accolade recognizes Nissan LEAF, a pioneer in zero-emission mobility, as comparable in its driving performance, quietness and superb handling to gas-powered cars. And it validates Nissan's clear vision and the values of sustainable mobility that we want to offer to customers around the world."

The jurors who chose the Nissan LEAF are comprised of an international panel of 66 top-tier automotive journalists from 24 countries. The World Car of the Year awards are administered by a non-profit association with no affiliation to any publication, auto show, automaker or company, making the awards as unbiased as possible.

Electric vehicles are the hot trend this week in web news, and it’s no surprise why. Several countries, including the U.S. and China, are making a big push toward electric vehicle infrastructure. With gasoline prices soaring out of control, it’s no surprise. The Chevy Volt, Nissan’s direct competition for a market-scale electric vehicle, won the award for 2011 World Green Car of the Year, beating out the Nissan LEAF (although the LEAF won the big prize, so I don’t think there’s any hard feelings). Start doing your research into the electric boom folks, because the next car you purchase may very well be electric.