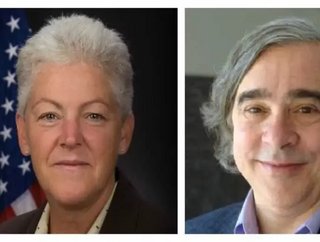 Moniz previously served under President Bill Clinton as the undersecretary of the Energy Department as well as the director of the Massachusetts Institute of Technology's Energy Initiative.

The president also promoted EPA official Gina McCarthy to lead the agency, who has served as a state environmental official in both Massachusetts (for former Gov. Mitt Romney) and in Connecticut.

Together, the two are “going to be making sure that we’re investing in American energy, that we’re doing everything that we can to combat the threat of climate change, that we’re going to be creating jobs and economic opportunity in the first place,” Mr. Obama said. “They are going to be a great team.”

As green groups continue to pressure the administration to do more to confront climate change, McCarthy can expect a fight with Republicans over the EPA's carbon emissions rules. McCarthy has played a major role in crafting the air pollution rules that restric toxic air pollution from coal-fired power plants and other fossil fuel emissions.

On the other hand, Muniz is likely to draw harsh criticism from green groups for his support of fracking for natural gas—a source that he feels will play a major role in helping to curb greenhouse gas emissions.

"Ernie knows that we can produce more energy and grow our economy, while still taking care of our air, our water and our climate," Obama said.