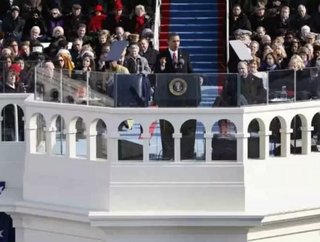 “We, the people, still believe that our obligations as Americans are not just to ourselves, but to all posterity. We will respond to the threat of climate change, knowing that the failure to do so would betray our children and future generations. Some may still deny the overwhelming judgment of science, but none can avoid the devastating impact of raging fires, and crippling drought, and more powerful storms. The path towards sustainable energy sources will be long and sometimes difficult. But America cannot resist this transition; we must lead it. We cannot cede to other nations the technology that will power new jobs and new industries – we must claim its promise. That is how we will maintain our economic vitality and our national treasure – our forests and waterways; our croplands and snowcapped peaks. That is how we will preserve our planet, commanded to our care by God. That’s what will lend meaning to the creed our fathers once declared.”

Vice President Joe Biden told environmentalists Sunday night that the President would not let climate change issues fall by the wayside, telling them to “Keep the faith,” in the action to come in Obama's second term.

“I'll tell you what my green dream is: that we finally face up to climate change,” he said at the “Green Ball” inaugural event over the weekend.

Nearly absent in the dialogue of Obama's first term and throughout the entire Presidential Debate, climate change will finally come into focus now that the President has attained a second term.

"I am a firm believer that climate change is real, that it is impacted by human behavior and carbon emissions," Obama said. "And as a consequence, I think we've got an obligation to future generations to do something about it."

Related Story: The Blame Game: The Death of Coal in the US