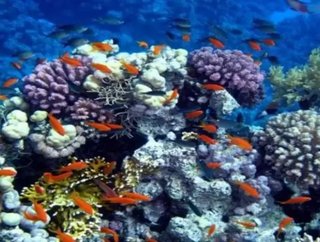 Excess carbon dioxide absorbed from the atmosphere has led to particularly high acidity in today's oceans, affecting sea life and coral reefs. Scientists have compared the deterioration phenomenon of the reefs to osteoporosis.

The higher acidity levels are especially dangerous for marine life such as oysters, because it slows the growth of their shells. In a study that mimicked the level of acidity scientists expect by the end of the century, clown fish started swimming toward predators rather than away from them, because their sense of smell had been dulled.

"We're just beginning to uncover many of the ways in which the changing chemistry of oceans affects lots of behaviors," Lubchenco said. "So salmon not being able to find their natal streams because their sense of smell was impaired, that's a very real possibility."

Plastic in the Ocean: What's the Solution?

As coral reefs deteriorate, coastlines are at greater risk of threats like tsunamis. Critical tourism dollars would also be greatly affected and seafood farmers would see a significant decrease in stocks.

Although some short-term solutions have been put in place to help monitor the changing acid levels, the long-term solution is obvious: reduce carbon emissions.

"The carbon dioxide that we have put in the atmosphere will continue to be absorbed by oceans for decades," she said. "It is going to be a long time before we can stabilize and turn around the direction of change simply because it's a big atmosphere and it's a big ocean."