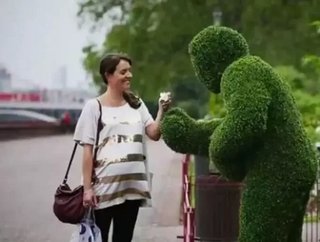 If you&#39;ve been watching the Olympics over the last week, you&#39;ve probably seen this commercial&mdash;Dow Chemical&#39;s latest attempt to ac...

If you've been watching the Olympics over the last week, you've probably seen this commercial—Dow Chemical's latest attempt to achieve a heartwarming, green image.

In the spirit of Olympic integrity, London's preparation for the event with an eye on the environment has officially made it “the greenest Games ever.” Ironically, three of the Olympics' official sponsors, Dow Chemical, BP and Rio Tinto, are up to their neck in lawsuits over large-scale environmental harms.

Dow's faceless green man is particularly annoying environmentalists in the UK, who haven't forgotten about the company's role in the devastating 1984 gas leak at an Indian pesticide factory in Bhopal. Survivors of the tragedy are currently holding their own “Special Olympics” with the children suffering from birth defects from the incident.

Bhopal activists say Dow owes them compensation for the industrial disaster and have aggressively campaigned to get the company dropped as a sponsor of the games.

UK's environmental watchdogs recently launched “Greenwash Gold 2012,” a campaign bringing attention to the environmental history of its sponsors. According to the group, the environmentally insensitive companies sponsoring the games are launching greenwashing campaigns to reverse their image. Using animated videos, the website gets its point across in asking “Who is covering up the most environmental destruction and devastating the most communities while pretending to be a good corporate citizen by sponsoring the Olympic games?”

BP is taking a considerable amount of the heat. Just last week, the company agreed to pay a $7.8 billion settlement for claims resulting from the Deepwater Horizon leak in 2010.

Rio Tinto, also in the running for the group's greenwashing metal, has been criticized for its operations in Mongolian mines, which have roused claims of environmental harm including air pollution. The company is also facing allegations of human rights abuses in mines of Indonesia and Papua New Guinea.

Although all three companies have defended their operations and the measures taken to ensure environmental safety, their recent history proves otherwise. For the sponsors of the “greenest Games ever,” it's about rebuilding an image following some very deep -seeded environmentally destructive pasts.