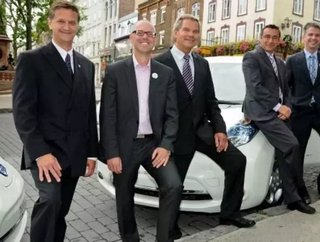 DOWNLOAD THE ENERGY DIGITALiPADAPP Carsharing is a wonderful concept being adopted by several metropolitan cities. The idea is simple, carshare members...

Carsharing is a wonderful concept being adopted by several metropolitan cities.  The idea is simple, carshare members have access to vehicles parked in lots throughout a given city.  Instead of dealing with the headaches of owning a vehicle in a congested urban setting, carshare members have access to community vehicles.  Most carshares have convenient online portals where members can sign up for a car model and time of pickup, go to one of the neighborhood carshare lots, and borrow the car for the day. Québec is putting a unique spin on the concept by offering North America’s largest all-electric carsharing service.

Communauto, Hydro-Québec, and Nissan Canada have teamed up for the partnership, preparing to launch the service in early 2012.  Communauto has added 50 new Nissan LEAF electric vehicles to its fleet as part of the service.

"With this project, Communauto is renewing the innovation of carsharing and its ability to offer residents of Québec a new way to have access to a car, while taking advantage of the latest environmental technologies," said Benoît Robert, president and CEO of Communauto. "Starting with our nearly 25,000 members, all citizens of the Québec and Montréal areas will have access to personal electric mobility for only $37 a year, even if they don't have a parking space to charge the vehicle. Another advantage of carsharing!"

A letter of understanding signed by both the Québec government and Hydro-Québec opened the doors for Nissan’s delivery of the LEAF EVs.

"Hydro-Québec has been collaborating with Communauto and Nissan for over a year to make this ecologically responsible initiative possible. We are very pleased to be associated with this project that will significantly contribute to the development of electric vehicles in Québec, while offering users our clean, renewable energy. Carsharing will allow a large number of drivers to appreciate electric-powered vehicles," added Pierre-Luc Desgagné, Senior Director - Strategic Planning and Government Affairs, Hydro-Québec.