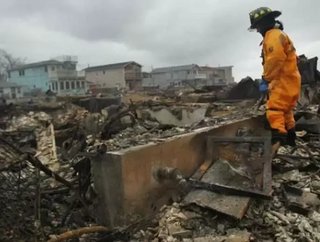 New York will hire over 5,000 people to work temporary government jobs cleaning up after Superstorm Sandy. Using around $27 million in federal Labor D...

New York will hire over 5,000 people to work temporary government jobs cleaning up after Superstorm Sandy.

Using around $27 million in federal Labor Department money, the cleanup operation will help to rebuild positions in New York City and eight nearby counties. The jobs are expected to last about six months and will pay about $15 per hour, according to state and federal officials.

In a separate effort, the state and Federal Emergency Management Agency are working to put New Yorkers into over 700 temporary FEMA jobs.

"This is a neighbors-helping-neighbors effort," state Labor Commissioner Peter Rivera said at a news conference in Red Hook. Gov. Andrew Cuomo called it "a chance to provide young and unemployed New Yorkers with job opportunities cleaning up their communities."

Thus far, over 800 people across the state have submitted applications. Some were surprised by the quick turnout of so many eager people, who had been hurting economically long before the storm hit.

“We won’t stop until businesses, homes and communities are back better than ever,” said Rivera.

Job-seekers can apply at a FEMA disaster recovery center, call the state Labor Department at 888-469-7365 or visit http://labor.ny.gov/sandyjobs