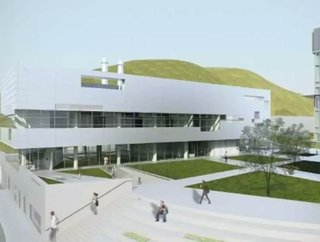 The Solar Energy Research Center breaks ground at Lawrence Berkeley Lab, where researchers are working on a project to convert sunlight into transpor...

The Solar Energy Research Center breaks ground at Lawrence Berkeley Lab, where researchers are working on a project to convert sunlight into transportation fuel. Using fundamental and applied research, they hope to ultimately set the stage for a direct solar fuels industry.

"Finding a cost-effective way to produce fuels as plants do -combining sunlight, water, and carbon dioxide - would be a game changer, reducing our dependence on oil and enhancing energy security," Daniel Poneman, Deputy Secretary of Energy, told SustainableBusiness.com.

The 40,000 square-foot, LEED certified facility will cost the Department of Energy (DOE) an upwards of $54 million, and is set to be ready in late 2014. In 2010, the DOE announced that it would dedicate $122 million over five years to establish a "Fuels from Sunlight Energy Innovation Hub."

The Lab also plans to build a bigger building in Richmond, California for a 2-million-square-foot facility that will house over 800 scientists involved in areas like bioscience, cancer and bioenergy.