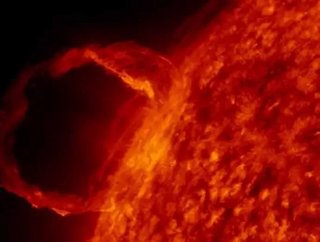 Solar storms like the ones that hit Earth&#39;s magnetic field this week are expected to become a common occurrence. The eruptions that released huge...

Solar storms like the ones that hit Earth's magnetic field this week are expected to become a common occurrence. The eruptions that released huge bursts of lights Sunday, Tuesday and Wednesday included some of the largest solar flares in the last five years.

NASA video of a solar flare that erupted this week:

As particles slammed into the Earth's magnetic field, magnificent auroras filled the skies. As beautiful as they are dangerous, giant solar storms can wreak havoc on satellites and power grids, knocking out power supplies. Fortunately, the solar flare Thursday morning was relatively minor.

Should we be worried? According to Nasa, no.

“At this point it’s a minor storm,” C. Alex Young, a senior solar physicist at NASA’s Goddard Space Flight Center in Greenbelt, Md told the New York Times. “It’s not going to be that big even if the levels increase a bit. This is really not something to be concerned about.”

But this is just the beginning of a series of more severe solar storms expected over the next 11-year cycle. While the current cycle appears quiet, the peak of the cycle, expected over the next year, will become more common and severe—the kind that could knock out power grids or put astronauts on the International Space Station at risk.

“I don’t think people should really be concerned unless an extreme solar storm is headed toward Earth,” Dr. Young told the NYT. “We want the general public to be aware of it and know what’s going on but at the same time not losing sleep over it.”