Solar Panels Made With Ion Cannon Cheapest on Market 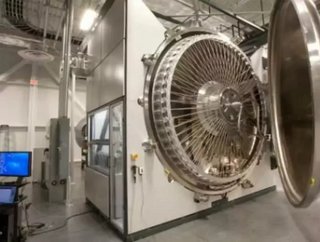 Twin Creeks recently revealed its new methods in producing photovoltaic cells that are half the price of today&#39;s cheapest cells. Made from a hydro...

Twin Creeks recently revealed its new methods in producing photovoltaic cells that are half the price of today's cheapest cells. Made from a hydrogen ion particle accelerator, the solar power startup's modules are cheap enough to challenge fossil fuels—a milestone in solar cell technology.

While the majority of solar panels are made by slicing a 200-micrometer-thick wafer from a block of crystalline silicon, almost half of the block is wasted in the process. Furthermore, the panels function just as well if made to be thinner, but silicon is brittle if made too thin.

In Twin Creeks' ion cannon, or Hyperion, 3-millimeter-thick silicon wafers are situated around the outside edge of a large, spoked wheel. A particle accelerator places hydrogen ions precisely 20 micrometers from the surface of each wafer and a robotic arm transports the wafers to a furnace where the ions expand into hydrogen gas, causing the 20-micrometer-thick layer to shear off. After applying a metal backing to make it less fragile and flexible, the wafer is taken back to the accelerator for another hit of ions. The result is a wafer that is a tenth of the thickness of a traditional solar cell.

While previously used accelerators have been too expensive for commercial use, Twin Creeks' own version is 10 times more powerful, according to Technology Review. With this equipment, panels can be made at about 40 cents per watt, or about half the price of panels coming out of China.