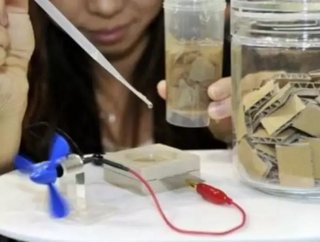 Sony recently debuted a new technology that turns paper into energy for an improved bio-battery at an exhibition in Tokyo last week. In a demo, paper...

Sony recently debuted a new technology that turns paper into energy for an improved bio-battery at an exhibition in Tokyo last week. In a demo, paper pulp was added to a small mixture of water to produce a bio-reaction strong enough to power a small fan.

By using cellulose to convert the paper into glucose, these bio-batteries are able to produce electricity. In addition to being a catalyst for the reaction, the cellulose can be used over and over, making the battery recyclable and sustainable. Researchers have likened the project to the mechanism found in termites that involves digesting wood into energy.

Though the demo was small, Sony's researchers claim that the waste paper powered battery can generate up to 18wh of electricity, which would be enough to power most digital music players currently on the market.

"Of course, this is still at the very early stages of its development, but when you imagine the possibilities that this technology could deliver, it becomes very exciting indeed," senior researcher Yuichi Tokita told BBC.

If brought to market, batteries made from harmful chemicals and metals could slowly become a thing of the past, replaced by the power of waste.