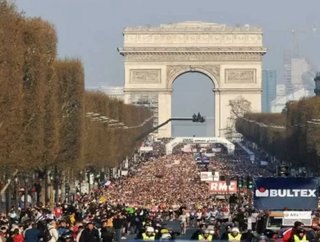 Schneider Electric, the global specialist in energy management, has commissioned an award-winning British cleantech firm to capture the kinetic energy...

Schneider Electric, the global specialist in energy management, has commissioned an award-winning British cleantech firm to capture the kinetic energy from runners and spectators at this year’s Schneider Electric Paris Marathon, in the largest ever install of their unique technology.

Pavegen Systems will install over 25 metres of their energy harvesting tiles on the runner’s course, spectator-viewing platforms, and at other key points along the route.

Pavegen’s innovative design converts the kinetic energy of footfall into electricity that is stored in a battery or used to power various applications such as street lighting, advertising, information displays, and communications technology. The Pavegen tiles flex 5mm when stepped on, converting up to 8 watts of kinetic energy over the duration of the footstep, i.e. 8 joules.

Installed at sites around the world, including the London 2012 Games, the Pavegen tiles contain wireless technology that transmits data on renewable energy amounts generated by each unit. This information can be sent to any designated website for access by smartphone or computer. During the marathon, which Schneider Electric is sponsoring in a four-year deal, the data will be displayed on giant screens at strategic points along the street course.

In a gamification twist, the marathon audiences watching in Paris and around the world will compete via a Facebook page to predict how much off-grid power the Pavegen tiles will harvest during the marathon. The most accurate estimate will win VIP access to next year’s race and the next best 50 estimates will receive prizes of GPS-enabled Garmin running watches.

If the runners and spectators manage to generate more than 7000 watt hours the Schneider Electric and its Foundation will increase their donation to “Habitat et Humanisme” from €50,000 to €60,000. The NGO will use the funds to help support its work with energy management for housing in local areas such as Île-de-France.

Laurence Kemball-Cook, 27, inventor of the technology and CEO of Pavegen Systems says:

“Pavegen could play a key role in the smart cities of the future. Imagine if your run or walk to work could help to power the lights for your return journey home in the evening.

The marathon installation will help more communities and organisations see the opportunity for a viable new type of off-grid energy technology that people love to use and which can make a low-carbon contribution wherever there is high footfall, regardless of the weather.”

Aaron Davis, Schneider Electric’s Chief Marketing Officer said: “The mission of Schneider Electric is to help people make the most of their energy, by becoming more efficient, reducing energy waste, fighting against climate change for example, each time carrying out wide-ranging collective actions engaging as many people as possible.

“In the long-term, our ambition is to make the Schneider Electric Paris Marathon the first energy positive race in the world.”

For the Paris Marathon on Sunday 7th April, Pavegen tiles will span the iconic Champs-Élysées to form a renewable energy section of the course, where over 50,000 runners will compete to win the 26 mile and 385 yard (42.195 km) race. Pavegen tiles will also be at the Running Expo entrance where competitors collect their race numbers, bibs and RFID tags for race timing, and where visitors can access stalls and information both before and during the race.

Spectators at the annual Paris race will also be involved via energy-generating viewing platforms on either side of the course. ‘Energy pods’ will encourage spectators to use the energy harvesting technology and learn more about the energy output of the Pavegen units, helping them to make more accurate total energy estimates to win the competition.

“We have a disruptive product,” concludes Kemball-Cook, “our partners in the energy and infrastructure have been quick to grasp the potential of a system that can be seamlessly integrated into existing architecture to generate electricity, without being connected to the grid. This installation represents another significant milestone in the ‘upscaleing’ of Pavegen’s unique energy solution.”