An Ultra-Efficient LED Bulb Below $15? 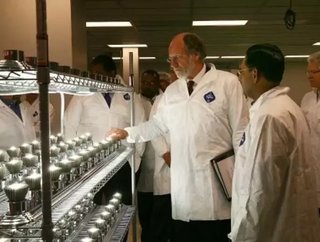 Light Emitting Diodes, more commonly known as LEDs, are the most energy efficient lighting available with the exception of natural sunlight itself.  While homes and businesses improve their energy efficiency to lower electricity bills, lighting is a chief concern.  Most people are aware of the energy sucking drawbacks of traditional incandescent light bulbs, and tend to turn to Compact Fluorescent Lights (CFLs) instead of LEDs primarily for price point.  CFLs are more on-par with the initial costs of incandescent bulbs than their LED counterparts, but contain harmful compounds such as mercury, which makes discarding the bulbs a potential danger.  Now, a partnership between Lighting Science Group and Dixon Technologies may see the price of LEDs finally coming down.

Lighting Science Group is one of the world’s premier LED lighting solutions companies and Dixon Technologies is an Indian-based manufacturer of electronics technology.  The two partners have recently unveiled their first joint product, an omnidirectional 60-watt equivalent A19 LED bulb that will sell for less than $15. Lighting Science Group will introduce the bulb to India’s lighting market late this year, with an international release expected in early 2012.

"With 800 million incandescent light bulbs and 300 million CFLs sold in India each year, the market is ripe for these highly efficient, long lasting and nontoxic products," says Atul Lall, deputy managing director of Dixon Technologies. "The economic and environmental implications of this partnership are significant: old-style light bulbs use 60 billion units of electricity each year, seven percent of India's total, and our Lighting Science Group Definity® lamps could save over 70 percent of that, equivalent to 32 coal fired plants with 500MW capacity."

The Lighting Science Definity® bulb screws in just like its incandescent predecessor, but uses 85 percent less electricity.  When compared to CFLs, the bulb saves 35 percent more energy, and contains no toxic mercury.  While the initial cost of just under $15 per bulb may still terrify the bargain shopper, the average payback time in energy savings is only eight months, and the bulb has a lifespan of about eight years.  The full line of the new Definity® products will include street lights, outdoor and industrial lighting fixtures and replacement bulbs.