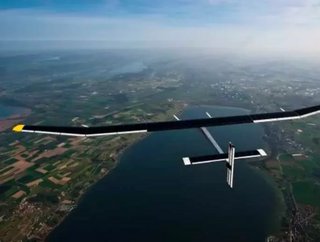 While solar energy provides countless solutions to the looming world energy crisis, there is one sector that solar has generally been ruled out as a f...

While solar energy provides countless solutions to the looming world energy crisis, there is one sector that solar has generally been ruled out as a fossil fuels substitute: commercial air travel. But a Swiss research team is bringing solar air travel closer to reality. The world’s first international solar powered flight has taken off this morning from Payerne, Switzerland and is due to land at Brussels airport 12 hours after departure.

The plane runs on 12,000 solar cells and embarked on its first flight in 2010. Commissioned in 2003, the Solar Impulse project has generated a 90 million euro budget for the ten-year project period. The project involved collaboration between Swiss lift maker Schindler and research assistance from Belgian chemicals company Solvay.

The solar plane has already completed a 26-hour flight in April of 2010, which is the world record for time in air for a solar powered aircraft.

However, Solar Impulse is no threat to commercial airliners just yet. The plane is a slow moving craft, with an average flying speed of 44 miles per hour (77 kilometers per hour). Developers even had a difficult time introducing the slow-moving airplane into the commercial air traffic system.

Project co-founder and pilot Andre Borschberg says, “The objective is to demonstrate what we can do with existing technology in terms of renewable energy and energy savings… It is symbolic to be able to go from one place to another using solar energy.”

A larger prototype based on Solar Impulse is being developed and is scheduled to circumnavigate the world in 2013.

Yet, solar technology still has a long way to go before it is applicable to commercial air travel. Current commercial flights tend to travel upward of 10 times faster than Solar Impulse. Plus, Solar Impulse is a single cabin plane, much smaller than say a jumbo jet capable of carrying hundreds of passengers. Nonetheless, it is certainly a step forward.