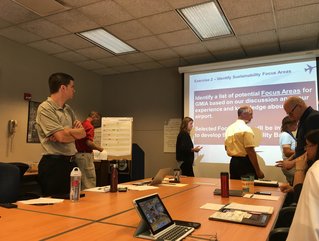 “I would say I was into sustainability before it was called sustainability,” muses Craig Riley, Leader of Corporate Advisory & Sustainability Services at AECOM. “I was part of an early cohort of people who got technical degrees, in my case environmental science and chemistry, which are now the scientific underpinning of the sustainability discussion.”

Such discussion is firmly rooted into the minds of the conscious consumer; consumers who are placing increasing pressure on organisations to demonstrate custodianship and be transparent about the provenance of their products and services.

Yet before the turn of the century, the term sustainability was something of an unknown beyond environmental circles. Even recycling, the simplest form of sustainable activity now so engrained into our everyday lives, barely entered the conscience.

So, why did Riley chose to go into the (relatively) unknown at the time he did? “This gets to the heart of the broader passion for my work,” he says. “I never pursued this for the money, nor was it the sexy thing to do. I started studying these things back in the 90s because I understood the critical nature of doing this work.

“Yes we’re consultants here at AECOM doing this as a business, but what drives this work is a much bigger agenda – the mission critical nature of what we do. This is vital for species, our planet and, at the end of the day, for business longevity as well.”

In Riley’s on own words, his CV of sustainable and business certifications sits behind his name like alphabet soup. He is accredited as a LEED AP (BD+C), a certified sustainability professional (ISSP-CSP), certified in the GRI Sustainability Reporting Process, and also holds an MBA “because the language of business is really what makes the world move around”. Starting out in scientific and technical consulting at AECOM in 1999, Riley’s experience soon expanded into green building and corporate sustainability strategy and management.

What became clear to Riley very quickly was that sustainability and business language needed to marry.

As a consultant he is used to defining sustainability for clients, the specifics of which vary on a case-by-case basis, but there are some wider definitions he points to that have held up over the years. “I still look back to some of the definitions that have stood the test of time, for example the triple bottom line that was coined by Elkington and adopted by practitioners in the late 90s and 2000s,” he says.

“I do see sustainability as being a strong balance between environmental, social and economic considerations. This is a balance that has to be constantly managed. You have to look beyond the pure financial business case.”

While these fundamentals may not be hotly disputed, defining sustainable practice on various scales, from an individual’s lifestyle to a multinational corporation, is open to a chasm of interpretation. The language of sustainability is thus vitally important, especially for AECOM and its clients at an organisational level.

“It’s very important that definitions in organisations are consistently understood,” Riley continues. “If a sustainability programme is going to be successful there truly has to be a tone from the top signalling support – there must be meaningful policy and governance from the leadership and a strategy that can be conveyed. With the right plans and policies in place, sustainability becomes a behavioural part of the organisation - going all the way down through the organization and then up again form the bottom, in that we must support a culture where the workforce is motivated and incentivised.”

Depending on what that organisation is, Riley and AECOM have to be adaptable. “I have found an approach that makes sense, and what AECOM offers is a flexibility to consult on a project basis or the entire programme, from defining what sustainability is to implementation or auditing,” he continues. “Each time we come into an engagement we realise each plan or approach has to customised – some organisations have more money to spend and want to move the needle, and others only want to dabble in certain areas, so you have to be nimble and responsive.”

There is no better demonstration of this requisite than at airports. This represents a key area of business for AECOM and one that clearly excites Riley, not least because he can go in and implement the entire strategic package but also assess individual topics and develop implementation plans.

Starting with visioning sessions, AECOM determines key priorities and maps out programmatic areas. Granted, airports are enormous producers of greenhouse gas emissions (GHGs), noise and waste, but Riley has first-hand experience of how seriously sustainability is taken in the aviation sphere.

“Sustainability for the industry is massive,” he says. “Airports are mini cities - they are a gateway to and from a region. Each industry has its ‘social license’ issues. Airports are enormous economic engines and passengers, and the community often have pride in their local airport while at the same time want to hold the airport accountable for noise and local air pollution issues.

“This isn’t to say these airports don’t already have policies for air pollution and noise, but by integrating these into a sustainability plan we can engage with stakeholders and have a much broader and more engaging discussions. It brings the airport to life in some ways.”

From airline carriers and ground transportation companies to retail outlets and parking operators, airports contain numerous different stakeholders. This leads inevitably to the question of whether this in itself presents Riley an additional challenge. “It really does,” he answers.

“All of these different entities have varying levels of interest in sustainability. Airports realise they can implement actions on carbon, energy and waste on their own where they have more control, but where airports are starting to look now is how do they engage tenants, lease holders and suppliers like ground transportation companies, taxis, transportation firms like Uber and others. How do we make this airport more sustainable in the areas we don’t control? That is the key question many clients are asking, and it is a vast challenge – with airports and all other sectors that also rely on other entities to implement their business model.”

While Riley admits there is no silver bullet, and that different airports bring with them different challenges, he does revert back to the importance of initiative being shown at the very top. “If the airport director is saying we take sustainability seriously, and if you want to operate here then you need to engage, then progress will be made,” he adds.

Riley’s work with AECOM stretches beyond the public/transportation sector into private enterprises working in numerous industries. Though one of his primary areas is airports, manufacturing is another area of current excitement, in part because a particular project has reignited an interest in chemistry.

While we cannot divulge names or much specific detail, Riley does explain how the work came about. “In the last year we worked for one of the world’s largest apparel, footwear, and outdoor brands – one of the brands that is actually leading on sustainability,” Riley says. “They came to us to look at chemistry, a topic that no-one is really talking about yet.”

AECOM examined the industry at a global level to determine the current state of management on chemistry, and how big a deal green chemistry is. Riley, who holds a degree in the science, along with his team, developed a corporate white paper for the client to use as a basis for setting a new corporate strategy.

And it is businesses setting new sustainable strategies and forging ahead with new focuses that will ensure it remains effectively implemented on the ecological, social and financial fronts that Riley mentioned at the outset.

Riley is a sustainable optimist, despite the air of unease since President Trump won the US election last year. What impact, if any, will this have on organisations truly embracing sustainability?

“This is the million dollar question,” Riley says. “Nobody has an answer yet. However, in the sectors I work in and the businesses I work with, the reasons for doing these things transcend regulation - the sustainability drivers are more important than regulation. And when you can convey this in a business setting it becomes much more powerful.”

Whether it be opening up new revenues, shoring up your social license, cutting costs, diversifying expertise or reducing risk, there are numerous cases to be made for taking corporate sustainable strategy seriously, not least because consumer expectations continue to grow.

Riley concludes: “There is a demand for transparency and action among client customers, financial stakeholders, and the public at large. There are critical reasons why sustainability is important for business, and I believe this will become louder during the Trump era. I believe there will be a pendulum effect where corporations are more willing to say why they’re addressing these topics.”