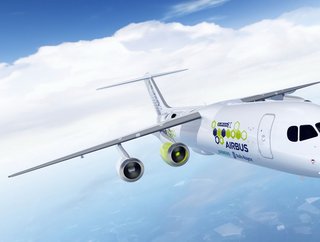 Energy Digital takes a look at the race to deliver the first commercial electric aircraft. Mark Cousin, SVP Flight Demonstrators CTO at Airbus, talks about the company’s collaboration with Rolls-Royce and Siemens.

The great electric air race is underway. European aviation heavyweight Airbus is collaborating with Rolls-Royce and Siemens, while budget airline easyJet has teamed up with California’s Wright Electric, with both partnerships targeting the introduction of electric energy storage.

Analysts agree the probability of purely electric shorthaul airliners in the next decade is realistic, but these will be relatively small aircraft carrying 15-20 passengers. Energy storage capacity will be too low to fly a full journey on a 100% electric flight, so we won’t see 100-passenger aircraft flying from London to Amsterdam in 10 years’ time. The airlines involved in this endeavour are starting to ask whether their future fleet will still consist of large 100-plus seat aircraft, or if they’ll have a fleet of smaller aircraft flying shorter routes on full electric.

“We could see a proliferation of smaller aircraft flying out of the less congested airports on relatively short one-hour routes,” suggest Mark Cousin, SVP Flight Demonstrators CTO at Airbus. “This would change the dynamics of air transport and pave the way for autonomous aircraft with no pilot on board, resulting in aviation costs falling dramatically, while maintenance for an electric aircraft will be much cheaper than for one powered by gas turbines.”

Cousin is at the forefront of the Airbus Demonstrators initiative. The programme’s goal is to set an objective not achievable with today’s technologies to force the development of innovations – in this case, the future of hybrid electric propulsion. “In the next couple of years, we’ll see three major demonstrators,” reveals Cousin. “The first is being developed by our colleagues in Silicon Valley – Vahana is a tilt wing single person urban air mobility vehicle. By the end of 2018 we expect the first flight of the City Airbus, a proof of concept of a four-seater air taxi. And we’re also due to announce the successor to our E-Fan, the E-Fan X. The only way we can learn what the issues will be, and how we can overcome them to improve our product, is by flying and testing.”

“Improvement in the power-to-weight ratio, or energy storage density, of batteries is required. Even when we take into account the favourable efficiency difference of electric motors versus gas turbines, the conversion of energy from kerosene to thrust is 50 times as high as the conversion we see with energy storage systems. That is going to limit how much energy you can carry and how far you can fly.”

“We’re running a 2MW motor directly powering a turbo fan which will generate thrust, so in order to achieve efficiency in the megawatt class, you need to transmit the power at a very high voltage. We’ll be transmitting power around the E-Fan X at 3,000 volts DC, yet the highest voltage on aircrafts flying today is 230 volts – it’s a big step. The challenge at 3,000 volts is what we call partial discharge. You get a corona effect. Unless you put massive amounts of insulation around the cables, there is currant leakage from the transmission line to any conducting elements. At sea level in trains and boats it’s not a big issue because air can be a good insulator, but at altitude the air is much thinner and that effect is less powerful. We need to establish the right levels of insulation on the wiring and the separations between cables and structure to control this difficult phenomenon.”

“Today, high-powered electric motors are around 96% efficient, which means the other 4% is coming out as heat. We need to get those losses down to less than 1% in the motor and transmission systems. All of these elements need to be addressed or the hybrid system will be less attractive compared to a traditional gas turbine because you can’t waste the energy you store and transmit.”

Tesla CEO Elon Musk states that once batteries are capable of producing 400 Watt-hours per kilogram, the potential for energy density to beat the weight problem and deliver pure electric transcontinental flight becomes ‘compelling’. Currently, it would be impossible to fly from London to Singapore with pure electric power because an aircraft would have to carry too much weight in battery to have any room for passengers. Until that goal is reached, Cousin believes larger, longer range aircraft will follow a hybrid model. “Initially we’ll see a large generator (2MW) installed between the thrust-producing fan and the gas turbine, and that motor/generator will be used throughout flight to either inject or extract power depending on the phase of flight you’re in,” he predicts.

When taxiing along the runaway, planes could operate purely electrically and during take-off would use the energy storage as back up. Then, if an engine failed during ascent, power could be injected into the other good engine to boost its thrust-producing capability. Gains could also be made at the top of a climb to deliver extra thrust to reach cruise altitude.

“We’re seeing efficiencies of over 50% which is as good as the best diesel engines,” adds Cousin. “However, they are horribly inefficient when they’re operating in off-design points. For example, in descent when you’re idling the engine so it’s ready to give power within eight seconds if the pilot pushes the throttles forward – it’s burning a lot of fuel to produce almost no thrust. We would hope to see the engine operated largely electrically in these types of descent phases, putting very little fuel into the engine, but still keeping it at a speed to deliver thrust via injection if needed. Big savings could come from that, especially on short range operations where a large portion of the flight is in descent (London to Paris would be 30%). In the first iteration aircraft will become hybridised.”

The hybrid model with electric energy storage could fill the gaps to allow a gas turbine to run at continual peak efficiency. It’s the sort of combination found in big ships, and even trains. The thermal engine will run at certain points in the journey, generating power at its peak efficiency. Once the power requirement drops, or the energy storage is full, the engine is shut down and the vehicle runs electrically, then when the battery’s down, the engine will start again. “It’s what you’re seeing with hybrid cars today,” notes Cousin. “Running the engine at peak efficiency then shutting it down to run electrically when the thermal efficiency of the engine would be low. For aircraft, it’s not a question of if, but when.”

Indeed, when Energy Digital spoke with Honeywell’s Mike Stewart, Aerospace VP for Advanced Tech, he confirmed Cousin’s vision: “Hybrid propulsion is already being supported by Honeywell with its 1MW generator. In fact, three 1MW generators are being used on Aurora’s LightningStrike demonstrator to exhibit the capabilities of hybrid-electric propulsion for vertical take-off and landing.

“The most recent solar power plant to go online in the UAE is generating electricity at three cents per kwh, which is half of what you can achieve today by burning natural gas and a quarter of what we see from suppliers of nuclear power,” says Cousin. “If that trend of lower costs continues, you can see this form of transport becoming even cheaper. The big advantage is that it’s very light on infrastructure. That might not make a difference in the UK, which has substantial rail networks, but there is a belief amongst many of the players that in markets where the rail and road infrastructure do not exist, this approach could be a more efficient way of putting in place mass transport.”

With electric aircraft, the only requirement would be the building of relatively small aerodromes at either end of the journey corridor. “Electric vehicles, by the nature of having very few moving parts, will be cheaper to maintain,” argues Cousins.

Energy Digital also heard from Cyient’s Anand Parameswaran, Senior VP Aerospace & Defence, who noted “increasing pressure from the European Union to cut aviation pollution” as a factor in the likely acceleration of the adoption of new tech. “An effective hybrid solution would cut noise pollution as well as CO2, while airlines could slash one of their biggest and most unpredictable running costs in jet fuel, thus areas of focus for 2018 hybrid development are reducing the weight of batteries and the cooling equipment they require.”

The Airbus collaboration boasts the involvement of Siemens, one of the market leaders in terms of the design and manufacture of large electric motors and power transmission systems. In 2016, it flew the largest lightweight electric motor to date – a 260kw motor on an aerobatic Extra 330LE plane. “We’re drawing on their expertise of lightweight high efficiency electric motors,” maintains Cousin. “We’re also leveraging the expertise of Rolls-Royce in the provision of highly efficient gas turbines for aviation, seafaring vessels and power plants where they operate in a mode of fixed power and peak efficiency. Airbus brings the knowledge on how to integrate these technologies into the airplane.

“Building is relatively easy. For example, in the air mobility, air taxi market we’re seeing more than 50 companies working on concepts, but I don’t believe any more than a handful of these will ever succeed in certifying vehicles as safe for flight in the urban environment.”