Is The Australian Government Ignoring its Citizens on the RET?

With Australia’s Renewable Energy Target (RET) still in danger of being cut, a new poll shows that nearly 90 percent of Australians support the RET.

Naturally, with this strong showing of support, many are left wondering.

Liberal National Party senator Matt Canavan took to the internet to explain his position, saying that Australia already has a major surplus of renewable energy. Essentially, he argues, by keeping the RET, in place, the rich get richer.

“The RET costs the average family about $50 a year now; in a few years that will probably rise to $150 a year, or half a carbon tax but without the compensation,” he wrote. “Every time you open the fridge, the little white light will come on to remind that you are paying for rich investors to make money in renewable energy stocks. Australia’s renewable energy policies could simply be titled ‘Robin Hood visits Bizarro World'—they steal from the poor and give to the rich.”

Naturally, this was met with criticism. Director of Public Affairs for Vestas KenMcAlpine tweeted: 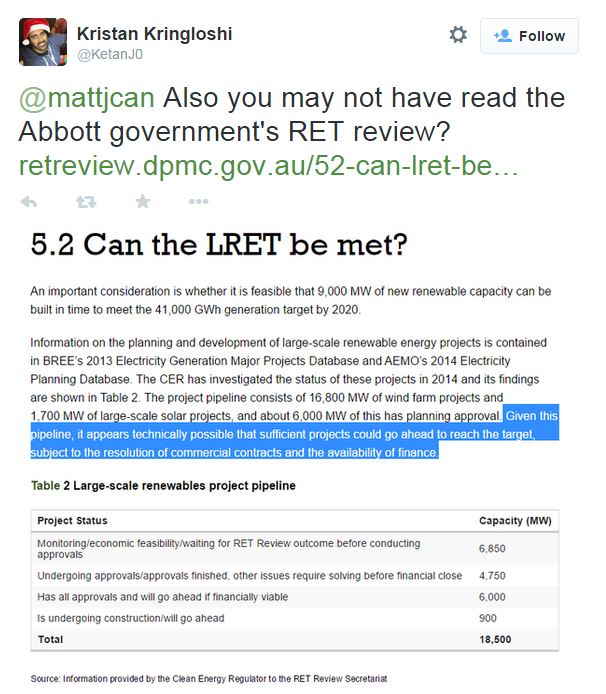 Some believe that the proposal to cut the RET is indicative of a deeper problem. 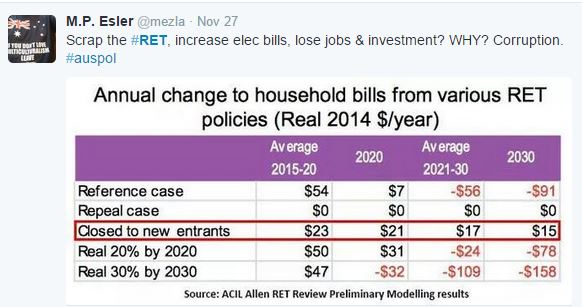 Critics of the Abbott government’s approach to renewable energy believe it starts with the man himself.

“Since taking office, Australia Prime Minister Tony Abbott has worked to dismantle every policy designed to confront climate change in his country,” wrote Steven Lacey of Greentech Media, in his labeling of Tony Abbott as the number five Clean Energy Turkey of 2014. “Abbott has blamed renewable energy targets and the country's former carbon tax on high power prices in the country. However, the government has admitted that renewables only make up 5 percent of consumers' bills and the repealed carbon tax only made up 9 percent—while 51 percent goes to network charges due to an overbuild of electricity infrastructure.”

A supporter of the RET or not, one thing is clear: the Australian people are speaking, but the government—at least at the top—doesn’t seem to be listening.