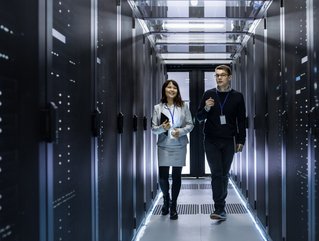 James Robey has been working at the multinational professional services and business consultancy giant Capgemini for over two decades, ten of which he has served as CSO. It was during his first seven or eight years developing new business, looking after clients and affecting internal change programmes at the company that Robey started to read up on some of the sustainability challenges the company faced and it became increasingly clear, whether it be climate change or population explosion, that sustainability was to have a profound impact on how business needed to operate over the next 10, 15, 20, 25 years.

“As a result of a series of conversations with our senior leadership we started to create a sustainability program to start driving change within Capgemini which I did initially from a UK perspective,” he explains. “And for the last six or seven years, I've been doing that from a global perspective.”

So, where did Robey and his team start, when addressing sustainability both internally, to its massive global operations and externally – to its numerous clients. “The starting point was really two or three-fold,” he explains. “Part of it was about really understanding the material impact that the business had from an environmentally sustainable perspective. So, we put into place some detailed measurements so we could understand our environmental impacts.”

Robey then orchestrated some bold targets for the UK business. “At the time, very few people were touching sustainability targets so it was quite a challenge in the sense that you couldn't just go out there and benchmark your targets against everybody.”

Three key areas Robey identified as being in need of refinement from a sustainability perspective was around travel, energy and Capgemini’s carbon footprint. “We decided to set bold targets on the ground. The scale of the challenge means bold targets are needed. And in many ways, it's better to set a really big target and get somewhere near that target than it is to set a really low and easy target and get over it because you're still making less of an impact.”

“We've always brought the business with us and one of the things we did right at the beginning of the programme was to create a sustainability board for the UK business; we now have one at group level too. But that sustainability board was comprised of the senior executives and the numerous CEOs, because of the way the business is structured. This has been really important in both the governance of the programme, but also to the drive to really push change through the organisation. Because ultimately at the end of the day, sustainability is a business change programme.”

Sustainability continues to affect change in virtually every aspect of business and supply chain and construction are no exceptions. “We look at the end-to-end responsibility surrounding sustainability. We have sustainability supply chain experts in the team and although I don't have sustainable construction people, we work very closely with our corporate real estate team on office refurbishment and office efficiency. They're a really strong centre of excellence within that team in terms of driving down energy use and increasing efficiency.”

Travel was identified as the area in which the biggest single impact for sustainability could be initiated. Robey and his team wanted to look at travel from a holistic perspective and not just through the lens of carbon footprint. “We wanted to look through the lens of employee wellbeing, employee safety and operational efficiency. So, Travelwell was a programme that looked at travel from an end-to-end perspective to address that issue. We said, ‘If we can find smarter ways of delivering, that's good for the environment and uses less carbon, but also good for people's work-life balance, then that's good for operational efficiency. We've all had those nightmare occasions where you're stuck in the wrong part of the world on the Friday night and they cancel the last flight. It's not great. But we wanted to reframe the way we thought about traveling, and we're continuing to build on that. At the moment we’re halfway through a project we're doing around virtual collaboration hubs. So, that's absolutely something we've made progress on, but it's actually something we're continuing to invest in.”

Capgemini, under Robey’s guidance, set a series of science-based targets as an organisation two years ago targeting 2020 and 2030. Robey and his team then launched Tenfromten last year, which unpicked some of the lessons they’d learnt on their journey. “There's a whole range of things we've been doing from an office energy efficiency perspective. Across the business, we have made enormous inroads in our energy efficiency across the estate, and that's everything from relatively straightforward updatings to putting in smart lighting systems, updating heating, ventilation and air conditioning systems. We have put in solar arrays at a number of our centres around the world, particularly in India.”

Capgemini built and launched a UK data centre called Merlin in Swindon in 2010. “The question we asked ourselves was what would it look like to build an ultra-sustainable data centre? So, you'll know that most data centres run somewhere between 1.7 to 2 as a PUE, so, you're using as much energy on powering the centre as you are running the kit. Merlin runs at about 1.09, which for anybody who knows what data centres are doing, is quite remarkable.”

One of Robey’s innovations at Capgemini is two by two grid on which one axis is ‘impact’ and on the other is ‘visibility’. “So, you would have some initiatives which have really high impact. So, for example, we talked about the data centre,or the changes you might do in a building. They're really important from a high impact perspective, but of course, people don't know about them, or they only know about them if you communicate about them. So, we wanted to look across the grid, and obviously not the low, low box, but we wanted to make sure that in parallel within those really high visibility initiatives, we were also doing things which were perhaps at a smaller environmental footprint, but nonetheless very visible. So, right at the beginning of the programme, we took all the desk bins away that people traditionally had. Later on, we replaced all the one-use plastic cups with china mugs and things like that. They're not our biggest environmental impact, but they're an important part of sending a signal to our 8,000 people that we're serious about this; we're investing.”

Sustainability in the supply chain

Robey is clearly enthusiastic regarding the innovative sustainability procurement methodology Capgemini has devised. “It was all about being able to reach out to our suppliers, to understand their position and what they're doing from a sustainability perspective to vet their performance. But what's been really innovative about the way we develop the system is it's useful for engaging and pushing information out. It's broader than the pure environmental sustainability. We've used the platform for going out to 100% of the UK supply base on topics like the Modern Slavery Act. For a lot of our smaller partners, there's been quite a big element of education involved, as well as engagement and assessments.”

In terms of sustainability at Capgemini the biggest external change, the biggest impact the company can affect is the work it does with its numerous global clients. “There’s the whole shift towards the client agenda, from my perspective,” he explains. “Just recognising the one or two percent with some of our big clients has a massive potential impact, which could be larger than our entire global footprint as an organisation. Day in and day out, when we think about our impact as a business, it’s our work with the clients that has the most profound effect. If you quantify life in terms of carbon, just as an easy metric, we're around about half a million tonnes per year. That's the carbon footprint of our operations. We're about just over 200,000 people spread across 40 or so countries. However, if we compare that half a million tonnes with some of our retail clients or some of our manufacturing clients or some of our energy clients, you suddenly discover that they have carbon footprints which are maybe 50, 100, or maybe 200 or more times Capgemini's impact.”

So, how does Capgemini help its clients? Robey sees sustainability as “business change, and transformation”, which is at the heart of what Capgemini does for its clients, for the last 50 year or so, “usually using IT”. “About 12 months ago now, we launched a new target for the group to help our clients save 10 million tonnes of carbon. That's about starting to shift the corporate mindset into realising the opportunities. Through doing the things that we do every day as a business we have a fantastic potential to make a real difference to our clients. For example, we might work with an organisation which has a large fleet of trucks, and a typical business challenge might be how to save a million litres of diesel. The traditional angle on that, the traditional business angle of course, is a million litres of diesel is £1.4 million of costs, and that would be a traditional business change or optimisation. Of course, saving a million litres of diesel saves around a three and a half thousand tonnes of carbon. All of a sudden, just by changing the mindset, you realise that the sorts of business transformation projects we might do can actually have a really positive sustainability benefit alongside a really positive business benefit.”

Capgemini has always been very active in the IT space and this represents a massive opportunity when it comes to sustainability. One of the big topics in the IT industry at the moment is of course revolving around migration to the cloud, and cloud computing. “If you do migration to the cloud correctly and smartly, you can save energy, anywhere between 60 and 70% of the carbon impact of your IT systems just by migrating from a traditional dedicated server-based view of the world to a smart cloud view. So, again, it's going through this process of recognising that there's a big opportunity for us to help our clients, and that's the external strand of what we're driving at from a sustainability perspective.”

“Of all the things we're doing at the moment, I think that client angle is the most exciting. I've given you a couple of examples. We did another project with a big manufacturing company, helping them to visualise the carbon impact of their global IT estate, with some dashboarding and some visualisation, and again, some of that has really brought to life for their clients just the quantity of energy flows associated with running the IT systems they rely on. This has really highlighted some very significant opportunities for them to optimise, to virtualise, to drive efficiency.”

I suppose the way we tend to think about it, in terms of if you're going to have a conversation with a CIO, which I was doing last week actually with a CIO of another big manufacturing company, is from an IT perspective, we think about three things. We think about how can you increase the efficiency of your IT estate as a company. So, that's energy efficiency, that's virtualisation. That's the first level. The next level around is how can you use IT to make your business more efficient. Then the third ring around the outside is how can you start to use IT to think about the value chain for everything, from your suppliers to your customers, to actually use IT to reduce the environmental impacts of your reason for being.”