Distributed Generation: Three Renewable Industry Shifts to Watch for in 2015

Green Energy
Nick Blitterswyk
4 min
Distributed renewable energy is one of the fastest growing sectors in the world, and working in such a nimble industry means that every year brings n...

Distributed renewable energy is one of the fastest growing sectors in the world, and working in such a nimble industry means that every year brings new innovations and developments. This year is no exception.

While 2014 had its share of renewable energy headlines, at UGE we’re incredibly excited for 2015 and the developments we foresee this year. Here are three that we’ll be watching closely:

Global adoption was front and center at the UN Climate Summit in Lima, providing a striking look at the new landscape for renewable energy. The world’s fastest-growing markets for renewable energy have shifted to developing countries, and with better economies of scale, distributed generation now has unlimited potential in places all around the world.

Flash back to five years ago — the growth markets were in highly developed regions like California and Germany. Today, markets like China, Chile, and India are exploding, and it’s not because of incentives. The scales have now tipped, with electricity from distributed energy already cheaper than from the utility grid. Distributed renewable energy is simply the cheapest, most reliable source of energy for these customers, and that means we can electrify remote telecoms towers, small islands, and new industries as easily as modern cities.

One of UGE’s fastest-growing markets is the Philippines, where businesses face one of the most expensive and intermittent electricity grids in the world, and used to turn to diesel or coal to increase reliability. Now, many facility managers are instead turning to renewables as a way to guarantee both

lower energy bills and a consistent energy supply for the operations of their building. For example, UGE installed a 153kW hybrid renewable energy system for a hospital that offsets 20% of the hospital’s electricity, and ensures that critical life-saving operations never lose power.

Though many of these developments began in the past year, we are on the brink of a massive shift in the way the world’s far-reaching regions generate electricity. 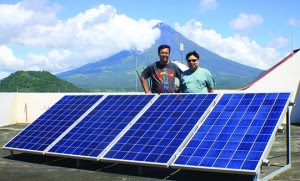 UGE's solar installation in the Phillipines.

The residential solar market has been the darling of investors, consumers, and the media, especially following SolarCity’s IPO in late 2012. But this year, attention will turn back to the commercial sector, as companies commit to huge renewable energy targets in the coming years, and the economics make ever greater sense. Mid-sized commercial projects represent a huge market for the industry, by some estimates larger than the residential sector.  In the United States alone, there are 5.6 million commercial buildings, and most of those suitable for solar can only fit arrays that are 200 kW or smaller. This project size is not without its challenges, but with the Fortune 500 rapidly investing in renewable energy, it’s a virtually limitless one for companies that can navigate it. 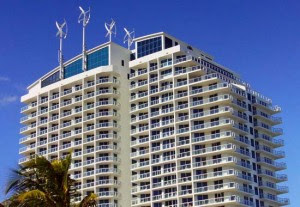 UGE's Wind Installation at the Hilton in Ft. Lauderdale.

3) Off-grid systems and storage take off

If you got tired of hearing the word “storage” last year, you may want to crawl into a bunker.  Energy storage paired with renewables will continue to scale this year as the chemistry and the software improve and are combined for better performance. U.S. grid infrastructure is aging and storm-related outages are happening ever more frequently. That means the need for resiliency and reliable backup power will only grow. In many other places around the world, the grid was never very reliable in the first place, so battery storage technology has vast off-grid applications to help fill in these gaps.  While we expect it will be up to five years before battery storage goes mainstream, 2015 will be a key year in the development of the business models that will allow that to happen.

Whether it’s the territory, the technology, or the type of customer, one thing is clear: in 2015, distributed renewable energy will no longer be just an “alternative energy” but a widespread and economically viable solution to many of the energy challenges we face across the world.

Nick Blitterswyk is the CEO and founder of UGE International, a leading developer of distributed renewable energy solutions for business and government, with projects in over 90 countries, including several for Fortune 1,000 companies. This article originally appeared on CleanTechIQ.