EIA: Electricity Generation Jobs Down Except in Renewables

Renewable Energy
Admin
2 min
Give yourselves a pat on the back, renewable energy. Looks like you’ve weathered the last four years better than others. According to a...

Give yourselves a pat on the back, renewable energy. Looks like you’ve weathered the last four years better than others.

According to a U.S. Energy Information Agency (EIA) report released on December, the electric power generation sector suffered across the board decreases in job numbers between January 2011 and June 2014 with one interesting exception—renewables. While fossil fuels were down 1 percent, nuclear fell 9 percent and hydroelectric power dropped 6 percent, all non-hydro renewables showed marked increases.

While nation-wide the electricity generation sector lost over 5,800 jobs in that period, non-hydro renewables were up by almost 1,800. That equated to a roughly 16 percent gain in wind, 20 percent in biomass, 9 percent in geothermal and a whopping 201 percent in solar. Those numbers are based on data from the Bureau of Labor Statistics. 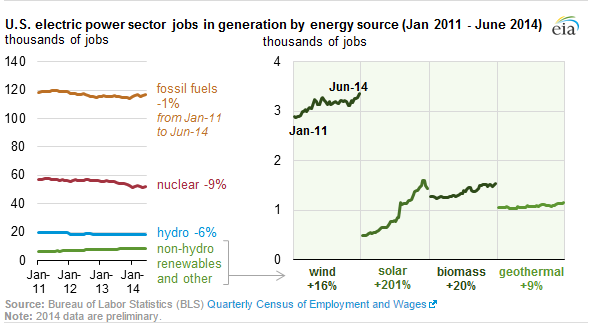 “BLS data shown here only reflect jobs in electric power generation, not the jobs associated with electric transmission and distribution systems,” the EIA stated. “Also, jobs involved in the construction of new facilities, processing or transportation of fuels, or behind-the-meter distributed generation installations and service (e.g., solar panel installers) are not counted by BLS as jobs in the electric power sector.”

The report added, “The overall decline in electric power generation jobs coincides with a period in which the United States has seen declining year-over-year electricity sales, driven by energy efficiency improvements, and growth in distributed generation, such as behind-the-meter rooftop solar, among other factors. Additionally, the growth in some types of non-hydro renewable generation, particularly wind and solar, brings relatively few ongoing operations and maintenance jobs.”