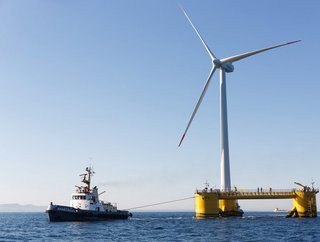 The world’s first floating wind farm opened on 18 October by Nicola Sturgeon, off the east coast of Scotland. The Hywind...

The world’s first floating wind farm opened on 18 October by Nicola Sturgeon, off the east coast of Scotland.

Located 15 miles off the shore of Peterhead, Aberdeenshire, the 30MW wind farm is formed of five floating turbines that span across 2.5sqm of water.

The 6MW turbines rise 175m above sea level, making them taller than London’s Big Ben and Oslo’s Plaza, and extend 78m below the surface of the water, tied to the sea bed by cables.

The anchors used to stabilise the turbines stand at 16m and weigh 111 tonnes.

The 15-year Hywind project was developed by Statoil, the Norwegian energy firm, with the aid of Scottish companies, at the cost of £210mn (US$276mn).

“In addition to the green benefits of renewable energy, it also has a very significant contribution to make to our economy,” Nicola Sturgeon, the First Minister of Scotland, commented.

“I’m pleased Scottish suppliers have contributed to the Hywind project from the development through to the production phase and are still involved to investigate long-term potential for floating wind.”

The concept of a floating turbine was conceived in 2001, a single prototype being made in 2009, and funding for the project was provided in 2015.

The benefits of a floating offshore wind farm are the lower costs of production than onshore farms, as well as floating turbines being able to reach areas in the sea with a depth of 800m, which so far has been unattainable for wind projects.