Leading the charge for electrification within logistics 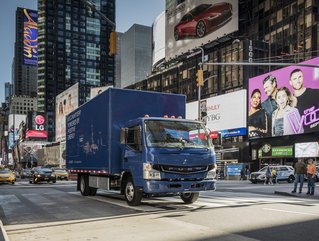 With a number of big players within the automotive and logistics industries selling and trialling electr...

With a number of big players within the automotive and logistics industries selling and trialling electric trucks of varying sizes, we’re at a turning point for the electrification of this competitive market.

In 2013, DHL made the commitment to move to all-electric powertrains but found that there just wasn’t a truck out there that could do the job. The logistics giant decided to make its own with the help of StreetScooter, a Germany university startup.

Recent research from McKinsey’s Energy Insights report suggests that eTrucks could account for 15% of global truck sales by 2030, but it’s urban light-duty trucks that will be the most popular, reaching sales as high as 25-35% in China and Europe.

The light-duty trucks will have a loaded weight of 7.5 tonnes and a range of around 100km, and while this payload and range might not be suitable for long-haul logistics, it’s perfect for deliveries within a city.

FUSO Trucks, part of the Daimler family, has already launched the eCanter light-duty truck, which sits nicely alongside the Eco Hybrid version – which has already seen customers saving up to 23% on fuel. At the launch of this new eTruck, Mike Belk, Managing Director of Mercedes-Benz & FUSO Trucks UK said: “Fully electric trucks are no longer science fiction – we at Daimler are already manufacturing them and now we’re putting them into operation with well-known customers. We’re pleased to build on our relationships with DPD, Hovis and Wincanton in this way, as they clearly believe the FUSO eCanter is a viable proposition for their urban distribution business.”

Many other manufacturers are focusing their efforts on bringing small, efficient electric trucks to market.

Recently, Volvo announced a 16-tonne electric truck called the FL Electric, with a range of 300km. Claes Nilsson, President of Volvo Trucks, commented on the announcement: “We’re immensely proud to present the first in a range of fully electrically-powered Volvo trucks ready for regular traffic. With this model we are making it possible for cities that aim for sustainable urban development to benefit from the advantages of electrified truck transports.”

While the purpose of this truck is still to serve urban areas, its weight limit and range make it very flexible. Volvo says that the truck will be primarily used for urban distribution and refuse operations.

It’s still the big rigs that are making the headlines, though, with Tesla and Mercedes both making huge leaps with their HGV projects. The Mercedes-Benz eActros is a heavy-duty vehicle with gross weights of 18 or 25 tonnes. The company has already launched an innovation fleet of 10 vehicles to select customers to test the concept. Each of these will have a range of 200km, which is more than suitable for inner-city deliveries.

It’s Tesla, however, that’s been picking up the lion’s share of coverage with the Tesla Semi, which is expected to go into production in 2019. This heavy-duty electric vehicle will have a range of around 800km and will serve the wider logistics market. Tesla says the Semi will achieve 0-60mph in 20 seconds when pulling 36 tonnes, the maximum allowed on US roads.

The costs of battery technology are dropping and Tesla is confident that its electric semi truck will work out cheaper than a diesel equivalent when fuel costs and maintenance are taken into consideration. When Tesla unveiled its big rig, it stated that companies could recoup the cost of the vehicle in two years thanks to savings on fuel alone.

Already, Tesla is taking large orders for these trucks with eager customers such as FedEx, UPS, TCI Transportation and Anheuser-Busch – the brewer behind Budweiser – jumping on the electric bandwagon.

There’s no doubt that electric is going to play a big part in the future of logistics, but it’s the early adopters that have already placed orders that will benefit the most. According to the McKinsey Energy Insights report, the supply of eTrucks and the charging infrastructure are unlikely to match demand in the short term. The report states: “The supply of trucks themselves will likely be a bottleneck for freight transport electrification in the next few years. This will change as new models are launched and production comes online.

“We expect that early adopters will mainly charge their fleet overnight at their own depots or warehouses. Thus, they will not be dependent on public infrastructure. The inability to charge while on the road means battery size needs to match daily range, which pushes vehicle cost up. However, once eTrucks become more mainstream, we expect the roll-out of supercharging infrastructure at distribution centers and along the main highways, enabling long-haul ‘refueling’ along popular routes.”

This is something Telsa is once again championing with trials of its mega charger, which will give the Tesla Semi a range of 600km after just 30 minutes of charging.