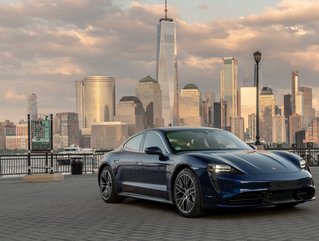 Porsche, the German auto manufacturing giant which credits itself as the largest and most pr...

Porsche, the German auto manufacturing giant which credits itself as the largest and most profitable in the world, has unveiled its first EV sports car: the Taycan.

Concurrently with the announcement, a Taycan began a 408-mile road trip from Niagara Falls to New York, completing its journey having encountered sun, rain and traffic along the way.

“It’s fantastic to see the Taycan take to the road in its final form for the first time, and to demonstrate its ability to cover big miles in complete comfort,” said Stefan Weckbach, Vice President of the Taycan Product Line, in Porsche’s news release on the matter.

“Of course, many owners will use their Taycan the way a Porsche is designed to be used - to be driven hard. The car is more than up to this challenge. At the moment, this is the one and only Taycan undisguised and on the road in the US. I can’t wait for it to reach customer’s hands and for many more to hit the roads around the world.”

The car stopped after around 250 miles to recharge at 14%, hitting 85% after only 24 minutes. Both factors display both impressive range and a relatively fast charge rate respectively.

Hitting general sale in December, the vehicle will be produced from 9 September at a new production facility, a zero environmental impact factory replete with Industry 4.0 production tech, at Porsche’s Zuffenhausen site.

“The new plant reflects the brand's tradition and sends out a clear signal about the future of Porsche,” said Albrecht Reimold, Member of the Executive Board for Production and Logistics at Porsche AG, in a company news release. “It was a deliberate decision to build the Taycan in Zuffenhausen – the home of the brand’s heart and soul.”