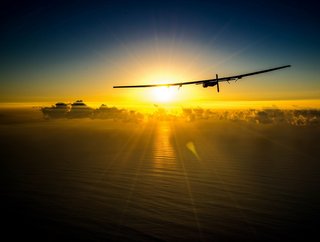 Directors of the multi award-winning documentary ‘Point of No Return’ will put the growing influence and versatility of renewables firmly...

Directors of the multi award-winning documentary ‘Point of No Return’ will put the growing influence and versatility of renewables firmly in focus at Middle East Electricity 2019 – the leading international trade event for the power industry, which runs from March 5-7 at Dubai World Trade Centre (DWTC).

Noel Dockstader and Quinn Kanaly, the duo behind the documentary that follows the record-breaking 26,000-mile Solar Impulse – the first round-the-world flight powered by solar, will host two special interactive screenings of their movie, which has garnered 10 awards at film festivals around the globe. The screenings will show up to 45-minutes of footage and include Q&A sessions with the show’s exhibitors and visitors.

The special free-to-attend sessions will take place at 11am and 2pm on March 7, with the film and its directors offering great insight into the exploits of the Solar Impulse pilots, psychiatrist and balloonist Bertrand Piccard, and engineer and jet fighter pilot André Borschberg, on a journey that flew the duo into aviation record books.

Described by former US Vice President and environmental campaigner Al Gore as being “at the cutting edge of exploration and renewable energy”, the documentary follows the journey of Solar Impulse, an aircraft which many observers initially wrote off as “impossible’ due to its extreme fragility.

The dangerous and historic trip, which was filmed in 16 locations, including Abu Dhabi, Muscat and Cairo, was a test of technology and the pilots’ endurance as they battled with technical failures, unplanned landings and stormy weather.

According to the directors, the documentary is “a story of hope, courage, and perseverance that gets to the heart of what it will take to solve the biggest environmental threat humans have ever faced.”

Informa Exhibitions, organisers of Middle East Electricity, chose to part-screen the film hosted by its directors to press home the potential of clean energy at an event that has the future of the power industry at its core.

“There could not be a better setting for this,” said Claudia Konieczna, Exhibition Director – Informa Industrial Group. “This film has taken awards across eight nations and sends a powerful message of what is possible. The film will play to a Middle East Electricity audience at the forefront of future power solutions delivery - and solar and renewables are integral to that. With this screening and Q&A with the directors, the message of Solar Impulse is coming home to a region which analysts attribute with speeding up the solar energy conversion movement. In a regional climate of economic diversification plans, all six GCC states are now prioritising renewables with the UAE leading the way and aiming to generate 75% of its electricity from renewables by 2050.”

Such is the interest in solar that it will have its own dedicated sector at Middle East Electricity 2019, which also features specialised segments devoted to power generation; transmission and distribution; lighting, and energy storage and management.

“The Solar sector at Middle East Electricity spans three entire halls of renewables, energy management and innovative storage solutions, with brands across the world displaying their answers to every capacity challenge,” added Konieczna. “It will form the largest gathering of solar industry professionals in the Middle East and Africa, offering the most effective trade-focused platform for buyers to meet international manufacturers and distributors.”

Informa has lined up no less than 94 hours of free conferences and seminars for the Middle East Electricity 2019 programme which will feature case-study-led sessions to keep delegates up-to-date with technology trends and projects.

More than 1,600 leading manufacturers and suppliers are committed to Middle East Electricity 2019, which is being held under the patronage of HH Sheikh Maktoum Bin Mohammed Bin Rashid Al Maktoum, Dubai Deputy Ruler and is hosted by the UAE Ministry of Energy.