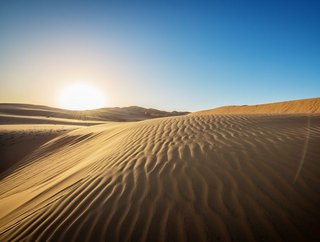 A Memorandum of Understanding (MoU) has been signed by Saudi Arabia and SoftBank Group Corp for the building of a 200MW solar farm.

A Memorandum of Understanding (MoU) has been signed by Saudi Arabia and SoftBank Group Corp for the building of a 200MW solar farm.

The solar power project is anticipated to cost US$200bn and will be located in the Saudi Arabia desert.

The project was announced on 27 March during a ceremony in New York, attended by the Crown Prince of Saudi Arabia, Mohammad Bin Salman Al Saud, Bloomberg reported.

The park will be 100 times larger than the world’s current largest solar project, with both Greece and Australia working towards 2GW photovoltaic (PV) projects.

“It’s bold, risky and we hope we succeed doing that.”

The solar park is anticipated to create 100,000 jobs and save $40bn through power costs.

The construction is set more maximum capacity to be reached by 2030.

“The kingdom has great sunshine, great size of available land and great engineers, great labor, but most importantly, the best and greatest vision,” commented Masayoshi Son, CEO of SoftBank.

“SoftBank seeks investment and Saudi needs energy, so it may make sense to sort the financing out in a large block and then separately hammer out the phases and the technical details,” remarked BNEF’s Head of Solar Analysis, Jenny Chase.

“It is worth noting that many of these memorandums of understanding do not result in anything happening.”