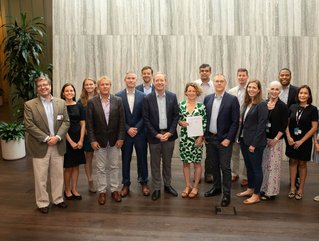 TerraPraxis & Microsoft partnership will look to deliver a digital solution that will tackle decarbonising more than 2,400 coal-fired plants worldwide

TerraPraxis, a non-profit organisation focused on actionable solutions for climate and prosperity, has announced a collaboration with Microsoft to deliver a digital solution that will tackle a significant decarbonisation challenge – repurposing more than 2,400 coal-fired power plants worldwide to run on carbon-free energy.

TerraPraxis explained that it is looking to combine its deep expertise in energy with Microsoft to build and deploy a set of tools to automate the design and regulatory approval needed to decarbonise coal facilities with nuclear power, helping transition one of the world’s largest sources of carbon to zero emissions.

The NPO said it aims to develop a software application with Microsoft that will be designed to analyse the existing coal fleet to determine the best avenue to retrofit the plants. This will save coal plant owners time and money, while giving their assets and the communities around them a new lease of life for decades to come, it added.

“We are thrilled to see Microsoft enable the Repowering Coal Initiative and help deliver a fast, low-cost, and repeatable strategy to repower hundreds of coal plants that would otherwise continue to produce large quantities of emissions,” remarked Kirsty Gogan, Director at TerraPraxis.

Eric Ingersoll, another TerraPraxis Director, added that working with Microsoft will ‘accelerate the clean energy benefits that Repowering Coal will bring to each community, while simultaneously initiating hundreds of projects by leveraging Microsoft’s unparalleled digital capability and global market scale’.

Sustainability challenge and the energy transition

The relationship began during last year’s Microsoft Global Hackathon, where the team working with TerraPraxis won the Hack for Sustainability challenge sponsored by Microsoft President Brad Smith, he elaborated.

"The global energy transition requires partnerships and technology innovation like this one led by TerraPraxis to repurpose coal-based power plants with carbon-free energy generation,” said Darryl Willis, corporate vice president of Energy & Resources, Microsoft. "We look forward to our role in enabling TerraPraxis to accelerate this transformational solution economically, securely and at scale."

According to the International Energy Agency, the world’s consumption of coal is set to rise yet again in 2022.