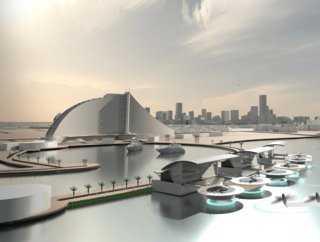 The American taxi-hailing company has signed a deal with NASA making them one step closer to their autonomous flying taxi plan.

The American taxi-hailing company has signed a deal with NASA making them one step closer to their autonomous flying taxi plan.

The firm plans to test the dubbed Uber Elevate in Los Angeles by 2020, with some form of service being available for the 2028 LA Olympics.

The four-passenger taxi would be completely powered by electric and could travel at speeds of 200mph, which Uber claims could cut down 80-minute journeys stuck in traffic to only 4 minutes.

This is part of Uber’s plans to go greener, as it plans to ban all diesel and electric cars in the UK by 2020.

Uber and NASA will be developing autonomous software, as opposed to actual vehicles.

“Doing this safely and efficiently is going to require a foundational change in airspace management technologies. Combining Uber’s software engineering expertise with Nasa’s decades of airspace experience to tackle this is a crucial step forward,” stated Jeff Holden.

The company has also previously partnered with Dallas-Forth Worth and Dubai to help makes its plans a reality on time.