A new report by The Solar Foundation, a nonprofit in Washington D.C. reveals jobs in solar have more than doubled in the last five years, going from 93.5k jobs in 2010 to 209k in 2015. Last year the industry added 35,000 solar jobs, an increase of 20 percent from the previous years. 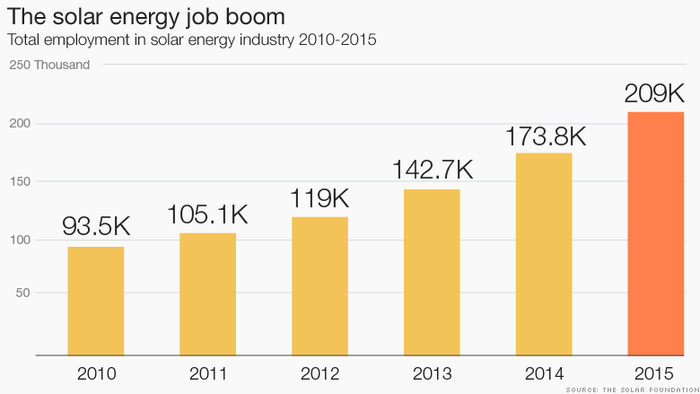 Today, there are more people working in solar than at oil rigs and in gas fields.

"The companies we're working with are begging to fill the [job] slots they have because they're growing so much," says Chris Gorrie, campus president of the Ecotech Institute, a for-profit job training center for solar and renewable energy in Aurora, Co.

Highlights from the 2015 report show:

• Over the next 12 months, employers surveyed expect to see total employment in the solar industry increase by 14.7 percent to 239,625 solar workers.

• One out of every 83 new jobs created in the U.S. since Census 2014 was created by the solar industry – representing 1.2 percent of all new jobs.