The world's largest solar tower is located in Dubai 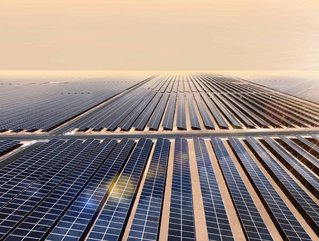 It’s the crown that will sit atop hundreds of jewelled panels tilted toward the desert sun – a solar tower that will rise an incredible 8...

It’s the crown that will sit atop hundreds of jewelled panels tilted toward the desert sun – a solar tower that will rise an incredible 853ft into the sky and deliver 700MW of additional power. The Mohammed bin Rashid Al Maktoum Solar Park’s new tower will extend the plant’s huge footprint to 134 sq km and is designed to reduce carbon emissions by a staggering 6.5mn tonnes every single year.

The Solar Park was first announced in 2012 as part of the UAE’s clean and sustainable energy strategy. Designed to deliver a production capacity of 5,000MW by 2030, the park is managed by the Dubai Electricity and Water Authority (DEWA) and is currently the largest renewable energy project on a single plot in the world. The vision of the project is to gradually build up the park’s capabilities over five clearly defined phases, each one marked by a sizeable shift in capacity and investment.

The first phase of the project was launched in 2013 with impressive results. Today, the park generates 13MW of clean energy and 24mn kWh of electricity per year, and reduces greenhouse gas emissions by 15,000 tonnes of CO₂ per year. The second phase of the project started operations in March 2017, producing enough electricity to power 50,000 homes and delivering an additional 200MW of power. It consists of 2.3mn photovoltaic (PV) panels, covers an area of 4.5mn sq km and has brought the project one step closer to its final goal. The third phase, to develop an 800MW solar PV power plant, was awarded to a consortium led by Masdar and will be completed in a phased approach over the next three years.

However, it is the fourth phase – the solar tower – that is currently making the world sit back and look up. “This project is a major step forward for the solar energy industry,” says Andrea Masini, Associate Professor of Information Systems and Operations Management at HEC Paris. “With a further 700MW of concentrated solar power (CSP) capacity to be added to the existing 200MW plant, not only is this set to be the largest solar plant in the world, but it will provide a significant contribution to climate stabilisation goals. The plant is expected to save 2.4mn tonnes of greenhouse gases each year.”

The construction and development of the solar tower has been awarded to another consortium, this time consisting of ACWA Power from Saudi Arabia and Shanghai Electric from China, and it will be completed over three stages with the first due for completion in 2020. Approximately 3,750 hectares will be covered in mirrors, concentrating the sun’s rays towards the tower. Just like traditional fossil fuel power plants, the energy provided by this plant will be available all times of the day – a challenge that few renewable energy plants have managed to overcome sustainably. This tower will be adapting a strategy employed by a similar solar plant, the Crescent Dunes power plant in California.

The Crescent Dunes plant pioneered a unique methodology and became the first solar plant capable of providing cost-effective power without being dependent on available sunshine. Crescent Dunes uses the mirrors at its plant to heat a tank of sodium and potassium nitrates, pushing their temperatures as high as 565°C. To generate electricity, the hot salt is used to boil water that produces high-pressure steam which then turns the turbines. This results in electricity on demand. When the salt isn’t needed, it is stored underground in its molten state until required. The Mohammed bin Rashid Al Maktoum Solar Park tower will use a similar methodology, with troughs collecting the heat from the tower and storing it in molten salt. Alongside its sheer size and scope, there is another aspect to the project that makes it stand out - its cost.

“This park will be generating MWs of energy and its capabilities in generating this 24/7 make it incredibly versatile and powerful,” says Martin Brown, independent advisor and sustainability consultant at Fairsnape. “One of the downsides to this type of power is usually its cost; the plant in California is struggling to achieve its predicted output so the cost of the kWh produced hasn’t met the targets yet. This makes it more expensive and impacts on development and uptake.”

This is not a challenge faced by those who are set to benefit from the Dubai-based park as it will be providing power at a levelised tariff – the incredibly competitive rate of $7.30 per kWh. This price competes directly with those commonly associated with fossil fuel plants and is one that few other plants can compete with. They are under pressure to recoup the heavy costs that come with investment and infrastructure.  The Mohammed bin Rashid Al Maktoum Solar Park rate is the lowest in the world.

The sheer size and scale of this project, along with its predicted cost, sends a signal to the wider market that large-scale CSP is a viable option in decarbonising the economy. The Dubai project is not alone in its efforts, joining numerous other solar towers in its search for solar supremacy. Alongside Crescent Dunes in California is the Aurora Solar Energy Project in Australia (set to cost $510mn), the 4.5GW project currently being planned by TuNur in Tunisia, The Solar Platform in Seville (cost estimated at $118mn), the Ashalim project in the Negev Desert in Israel, and the Atacama 1 in Chile (cost estimated at $1.1bn).

While the tower is a beacon of sustainable light in a world where climate change and fossil fuel depletion are an increasingly concerning reality, there are some issues that need to be considered going forward. “There is concern from ecologists around birds, insects and other wildlife,” says Brown. “The power of the beams between the tower and the collectors is incredibly intense and bird strikes are one issue to consider. I think it is vital that we look to alternatives to the traditional fossil fuels, however, and this sends a powerful message that flies in the face of the fossil fuel industry.”

It is a sentiment that Masini shares: “By building this solar park, Dubai is sending a clear message to the rest of the world that renewables offer competitive opportunities for energy independence and diversification, even in Gulf Cooperation Council (GCC) countries where the competition with fossil resources has traditionally been fierce. Since Dubai has a good track record in the development of large scale projects, I am confident that this experience will play a role in guaranteeing the success of this project.”