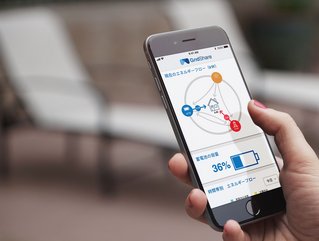 How Japan’s corporations are making the country a world leader in clean technology – with a little help from British innovation.

Japan is isolated from the Asian mainland by more than just the Sea of Japan. It is what we call an ‘energy island’ – it is reliant on homegrown energy, rather than importing from abroad.

In recent years, this energy isolation, coupled with earthquakes, floods and other natural disasters, has resulted in widespread power outages across the country. Homeowners are reacting by turning to solar and storage systems to reduce their dependence on the grid.

What’s more, Japan’s feed-in-tariff (FIT), introduced in 2009, only pays homeowners for 10 years. This means many people are coming to the end of their contracts and installing batteries to maximise self-consumption of their own solar power.

Japan’s economy, which is typically dominated by huge corporations, has been adept at rolling out consumer technology on a massive scale. But these large companies aren’t always nimble enough to get on the front foot with the most cutting-edge technologies – a factor that’s needed for it to succeed in the smart-energy transition. Fortunately, that’s where British innovation can help. Britain’s culture of entrepreneurship means it has fostered SMEs that are developing the world’s most innovative software technology.

It’s axiomatic that opposites attract. Translate that to business, and it means each party can provide something that the other is lacking, to deliver a greater positive impact. By combining Japan’s ability to roll out clean technologies en masse with Britain’s state-of the-art tech ingenuity, we can begin to see the smart-energy transition being delivered [see box out].

UK smart-battery company Moixa has rolled out its GridShare AI platform to manage batteries for 4,000 Japanese homes – believed to be the world’s largest live cluster of batteries, with a combined capacity of more than 40MWh.

The project is the result of a partnership between Moixa, ITOCHU Corporation, one of Japan’s largest trading houses, and TRENDE Inc., a new venture of TEPCO Ventures Inc., a subsidiary of the country’s biggest utility, Tokyo Electric Power Company Holdings Inc. (TEPCO).

At an event at the British embassy in Tokyo in October the partners also launched a new smart tariff enabled by Moixa’s GridShare that will reward home battery owners with lower prices for using electricity outside peak times.

The software can also manage large fleets of batteries, aggregating owners’ spare capacity to act as a virtual power plant, importing and exporting energy to deliver services to the electricity grid. ITOCHU is selling 1000 of its 10kWh Smart Star L systems a month, so in a year Moixa could be aggregating more than 100MWh of flexible capacity.

Of the venture, UK Energy and Clean Growth Minister Claire Perry said: “This AI platform by Moixa is a great example of our modern industrial strategy going global. With intelligent management of batteries designed with UK government support, Moixa is exporting its GridShare technology and knowhow so consumers in Japan can save money by using energy outside peak times, or in the future make money when using electric vehicles.”

The benefits won’t only be felt in Japan. Moixa is currently using GridShare across the UK in partnership with major utilities, network operators and public bodies, such as the European Regional Development Fund, the Department for Business Energy and Industrial Strategy, the Department for Energy and Climate Change and Innovate UK