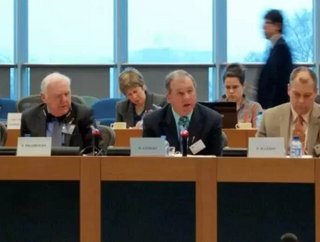 TO ENHANCE YOUR READING EXPERIENCE, VIEW THIS STORY IN OUR INTERACTIVE READER BY CLICKING THE IMAGE IN THE TOP RIGHT CORNER OF YOUR SCREEN! Oil sands a...

Oil sands are a controversial topic in Canada.  Environmental concerns over their exploitation have exacerbated government divides, but oil sands may hold the greatest promise in securing Canada’s economic security, as well as the energy security of the country’s neighbor to the south: the United States.  Alberta, Canada’s Minister of Energy Ron Liepert talks oil sands with Energy Digital in an exclusive interview.

Minister Liepert notes the abundance of oil available in Alberta’s oil sands.  “Alberta sits on 170 billion barrels of proven reserves in the oil sands.  This makes Canada one of the top three producers in the world [and] this figure is only 10 per cent of the existing oil sands deposits.  The problem with the other 90 per cent is that technology has not yet developed to the point where it is economic, but at some point in the future it will be.”

In regard to environmental concerns surrounding oil sands production, Minister Liepert states, “We have been a leader in terms of initiatives around the environment.  We have made significant advancement in tailings management.  Tailings are associated only with the mining operations, which is less than 50 per cent of the oil sands production now and continues to decline as a percentage of production.”

He continues, “We have a 15 dollar per ton carbon tax, and most of the large operations in the oil sands fall under that.  The tax goes into a clean energy fund.  Alberta only has a population of 3.5 million people, but has invested $2 billion—probably the largest of any jurisdiction in the world—into carbon capture and storage.”

When asked about the oil sands’ role in Canada’s energy security, Minister Liepert responds, “I think we need to look at energy security for the continent.  Canada doesn’t have an issue around energy security, but we can be a big factor in solving U.S. energy security.  In order to do that we need the capacity to move the product into Gulf Coast refineries and we’ve got the Keystone Pipeline application before the U.S. right now.”

Ron Liepert is a Progressive Conservative party member who was sworn in as Minster of Energy for Alberta, Canada in January 2010.  He previously served as Minister of Health and Wellness.