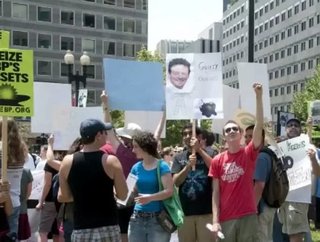 In the first criminal action charges brought against BP during the Deepwater Horizon probe, the Justice Department announced the first arrest made Tues...

In the first criminal action charges brought against BP during the Deepwater Horizon probe, the Justice Department announced the first arrest made Tuesday of a former engineer for the company, Kurt Mix. The 50-year-old is being charged with two counts of obstruction of justice, and is accused of deleting a string of roughly 300 text messages alerting a BP supervisor to the failure of efforts to cap the well during the 2010 disaster.

A federal investigation into the causes of the blowout, centering around involvement of BP, subcontractors Halliburton and Transocean and all implicated employees, has been a probe of interest for some time. The news marks a shift in focus as prosecutors investigate cleanup efforts shortly following the explosion.

Outrage, frustration and hopelessness continue to plague those affected by the spill, and the announcement rubs salt in still-raw wounds as speculation mounts that BP may have deliberately misled the public. The texts in question mention a rate of more than 15,000 barrels of oil a day spilling from the well, three times the rate disseminated through news media coverage of the event.

A recovered text reads, "Too much flow rate - over 15,000 and too large an orifice."The message was sent May 26, the day a top kill was put in place in efforts to contain the flow of oil. Public statements released by BP gave the top kill a success rate of 60-70%, but it was not until May 29 that failure of the action was announced.

BP has released a statement speaking of its efforts to cooperate with the Justice Department and said, "BP had clear policies requiring preservation of evidence in this case and has undertaken substantial and ongoing efforts to preserve evidence."

The explosion, leading to the largest oil spill in U.S. history, killed 11 workers and poured 5 million barrels of crude into the ocean. The leak continued for over three months, paralyzing the Gulf of Mexico and resulting in a class-action lawsuit backed by more than 100,000 claims from businesses and individuals who have suffered resulting economic losses. The $7.8 billion civil settlement is up for preliminary approval by a federal judge Wednesday.

Tom Becker, a fisherman in Biloxi, Mississippi, spoke to Time Magazine about the lack of recovery in the area. He has failed to garner any reservations for fishing trips in the months of July, August and September, busy months which would usually be booked up by the spring.

"I don't trust BP one bit,” Becker told the news source. “That's what I've thought all along. It's like, `What are they trying to hide today?'"