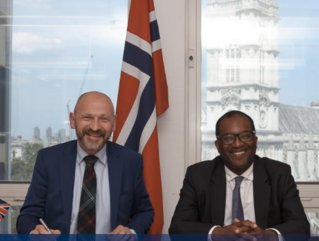 Under a recently signed agreement Centrica will now buy a total of 10bcm of gas per year from Equinor, boosting the UK's energy security

Centrica and Equinor have signed an agreement to deliver an additional 1bn cubic meters (bcm) of gas supplies to the UK for each of the next three winters.

Against a difficult geopolitical and macroeconomic environment, this supply deal will provide further energy security for the UK.

Centrica will now buy a total of 10bcm of gas per year from Equinor, a material part of the UK’s typical yearly gas demand. With Britain currently importing around a third of its gas requirements from Norway, the announcement underlines the strategic importance of the Norwegian relationship to UK energy security.

Centrica, the UK’s largest supplier of electricity and gas to consumers through its British Gas business, has been working with suppliers and the UK government to underpin the UK’s energy needs.

Chris O’Shea, Centrica Group Chief Executive, said: ‘This agreement is good news for our customers and the country. At a time when energy security is paramount, I’m pleased that we are able to do our bit to ease the pressure and provide some more certainty ahead of what may be a difficult winter.

"As Britain’s biggest gas and electricity supplier we take our responsibility to over 8 million British Gas domestic and business customers very seriously. This important agreement with Equinor underpins vital domestic supplies and strengthens the strategic relationship between the UK and Norway.’’

Kwarteng said while the UK ramps up cheap renewables and accelerates British nuclear to boost our greater energy independence, it will still need natural gas for many decades to come.

“With Russia’s criminal invasion of Ukraine, it is more important than ever that we source more of the gas we need domestically, but also from safe and reliable import partners while we transition. We cannot, and will not, turn off the taps overnight," he added.

“This major supply deal agreed today will help underpin British energy security over the next few years, and also reinforce our partnership with Norway as a key international energy ally.”

Helge Haugane, Senior Vice President Gas & Power, Equinor, said: “We are committed to further strengthen the strategic relationship with Centrica and the UK, both in supplying oil and gas and by playing a leading role in delivering on the UK’s decarbonisation ambitions.”

Equinor and its partners Petoro, TotalEnergies, Shell and ConocoPhillips in the Troll and Oseberg fields, have initiated a study and are looking into possible options for building a floating offshore wind farm in the Troll area some 65 kilometres west of Bergen, Norway.

With an installed capacity of about ~1 GW and an annual production of ~4.3 TWh, with a startup in 2027, Trollvind could provide much of the electricity needed to run the offshore fields Troll and Oseberg through an onshore connection point.

The Bergen area already serves several of these installations with power – and needs more input to its electricity grid. The plan is that the partnership will buy as much energy as the wind farm can produce at a price that can make the project possible.

Power from Trollvind could make a solid contribution towards electrification of oil and gas installations, accelerate offshore wind development in Norway, and deliver extra power to the Bergen region.

Equinor’s chief executive Anders Opedal said Trollvind is a concept where renewable energy works to facilitate several objectives; helping cut emissions through electrification, delivering power to an area where shortages have already created challenges for new industrial development, and Norway maintains its position as a leader in the industrialisation of floating offshore wind.

"A full-scale floating offshore wind farm like Trollvind could boost momentum towards realising the Norwegian authorities’ ambition to position Norway as an offshore wind nation, building on expertise from the oil and gas industry,” he said.