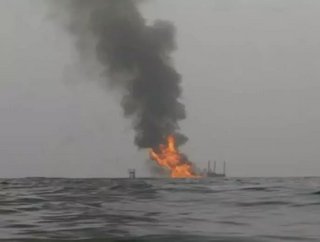 A natural gas fire that killed two people on a Chevron Corp. rig off the coast of Nigeria finally stopped burning Tuesday after 46 days. Though Chevro...

A natural gas fire that killed two people on a Chevron Corp. rig off the coast of Nigeria finally stopped burning Tuesday after 46 days.

Though Chevron confirmed the fire had stopped, the company gave no reason for delaying the announcement. Chevron spokesman Russel A. Johnson acknowledge that gas could start flowing from the well, and that a relief well to permanently plug the site was underway.

The series of explosions that occurred on the rig just 6 miles from shore on January 16 killed two men, one from India and the other from France. The company is still investigating the cause of the fire, but the Nigerian government believes a “gas kick” or buildup of gas pressure is to blame.

Producing some 2.4 million bpd of crude, Nigeria is Africa's top producer and a top energy supplier to the U.S. But despite the billions of dollars flowing into its government, many of the people in the delta remain desperately poor. The situation has worsened polluted waters and health problems of those in the area.