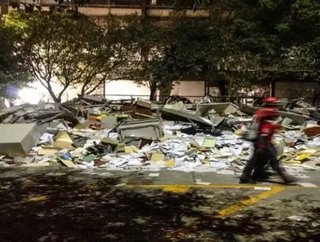 Following yesterday&#39;s explosion at the headquarters of Mexico&#39;s state-run oil company Pemex, officials have reported a death toll of at least...

Following yesterday's explosion at the headquarters of Mexico's state-run oil company Pemex, officials have reported a death toll of at least 32 people, as workers continue rescuing others from the rubble. At least 120 people were left injured.

Pemex director Emilio Lozoya Austin said in a press conference this morning that the company “would spare no expense” in its pursuit to rescue as many victims as possible. Government spokesman Eduardo Sánchez says an estimated 30 people may still be trapped inside the complex. President Enrique Peña Nieto also announced that he would be personally overseeing the rescue mission, and has visited some of the victims in the hospital.

"We're going to get to the bottom of this, to carry out these investigations to, first, know what really happened, and if someone is responsible in this case, apply the full weight of the law," Peña Nieto told the El Universal newspaper.

No new information is available on what caused the explosion that occurred Thursday afternoon, forcing 3,500 employees to evacuate the building. A variety of sources are speculating that it may have been caused by electrical problems, an overheated air conditioning unit or a buildup of natural gas.