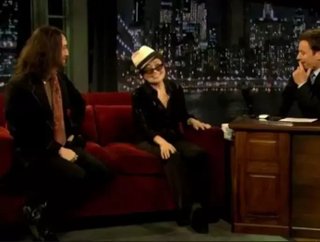 Musician Sean Lennon and his mother Yoko Ono recently appeared on &ldquo;Late Night with Jimmy Fallon&rdquo; to tell the world about their new movemen...

Musician Sean Lennon and his mother Yoko Ono recently appeared on “Late Night with Jimmy Fallon” to tell the world about their new movement against hydraulic fracturing.

In a performance of the song “Don't frack my mother,” the son of the late John Lennon wasn't just singing about his mother, but of mother earth. The two also announced the launch of Artists Against Fracking, a movement that has already recruited some 120 artists including Leonardo DiCaprio, Lady Gaga, Mark Ruffalo, MGMT, Beck and Joseph Gordon-Levitt.

“I'm not an activist, inherently,” Lennon told Fallon. But as the controversial drilling method for extracting natural gas has spread throughout the US in recent years, “We suddenly felt like we had to do something.”

In New York, activists are calling on Governor Andrew Cuomo to reject the drilling practice, who may be considering permitting fracking in the state's Southern Tier.

The group's website features an 18 minute short film The Sky Is Pink from Gasland Director Josh Fox, addressing Cuomo. Fox's sequel for HBO, called Gasland 2, should be out later this year.