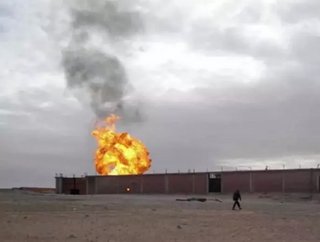 Written By: John Shimkus In early February, Energy Digital covered the story of a natural gas pipeline bombing in northern Egypt that cut off energy su...

In early February, Energy Digital covered the story of a natural gas pipeline bombing in northern Egypt that cut off energy supplies to Israel and Jordan. Now, three months later, a similar bombing has occurred in the same region. The gas terminal of Al Sabil in Egypt’s Sinai Peninsula exploded early Wednesday morning, as five masked bombers left the scene of the crime. No one has been reported injured and gas flow has been sealed to control the blazing fire. Those responsible for the bombing escaped.

This is remarkably similar to the bombing that took place February 5, and has some pointing the finger of blame at the region’s Bedoiun tribes, who have been in contention with the Egyptian government for purported unfair treatment.

Apparently, there was a previous attempted bombing on the gas terminal on March 27.

Jordan depends on Egyptian natural gas for roughly 80 percent of its energy generating needs, while Israel’s energy portfolio is reliant on about 40 percent. The attacks are prompting Israeli officials to seek alternative energy sources.

No one can say for sure who is responsible for the bombings or why. Some speculate that conflict of interests continue between Egyptian citizens over sharing resources with Israel, especially considering the two countries were enemies prior to the Camp David peace accords. Others believe the conflict to be internal, citing government corruption and illegal transfer of funds to Egyptian officials in the gas deals arranged between Egypt and Israel. In either case, this should be a wake up call to both Israel and Jordan that energy independence should not be undermined by any country, especially in a region experiencing such instability.