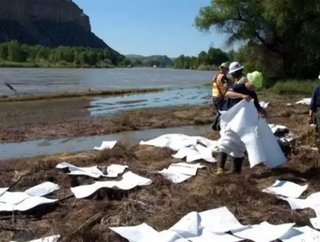 As Americans gathered to barbeque and watch fireworks this weekend, nature lovers in Montana got a &ldquo;crude&rdquo; awakening to the realities of ag...

As Americans gathered to barbeque and watch fireworks this weekend, nature lovers in Montana got a “crude” awakening to the realities of aging American oil pipeline infrastructure.  An ExxonMobil oil pipeline ruptured Independence Day weekend, spilling 42,000 gallons of crude oil into the Yellowstone River.

Reports are claiming the oil has traveled 150 miles downriver at a speed of 5 to 7 miles per hour.  ExxonMobil has 150 people actively working to clean up the spill along the banks of the Yellowstone River.  The company has deployed 48,000 feet of absorbent boom and 2,200 feet of containment boom.

The pipeline itself is buried eight feet below the river and extends for 70 miles, supplying crude to ExxonMobil’s refinery in Billings, Montana.

Nearby residents had trouble contacting the appropriate authorities to report the incident considering the holiday weekend.

While this oil spill is nowhere near the scale of 2010’s BP disaster in the Gulf of Mexico, the implications are similar.  Essentially, cracks in the oil supply chain can lead to disaster.  We know this, yet it continues to happen.  ExxonMobil is acting responsibly and cleaning up its mess, but more messes will most likely follow, especially as pipeline infrastructure continues to age and degrade.  Yes, it’s unfortunate for the birds and turtles that call the river their home, and the landowners who have to deal with contamination.  However, while the incident will undoubtedly create an environmentalist call to arms in the media, it is relatively isolated.  Nonetheless, it is just another wake-up call to the energy sector that, although oil is cheap, there are some very serious risks associated that must be addressed.