Frankenfish Surface in Japan and the Gulf of Mexico 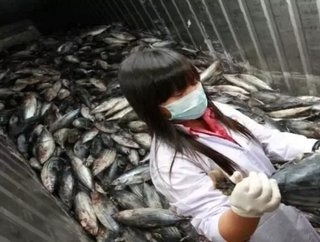 Two years after the catastrophic Fukushima nuclear plant meltdown in Japan, fish with 2,500 times the legal limit for radiation in seafood are turning...

Two years after the catastrophic Fukushima nuclear plant meltdown in Japan, fish with 2,500 times the legal limit for radiation in seafood are turning up near the plant.

Since the incident, fishing around Fukushima has been banned, along with beef, milk, mushrooms and vegetables produced in surrounding areas. The sale of certain kinds of seafood and produce have resumed, while scientists continue to monitor the spread and impact of radiation from the disaster.

Marine chemist Ken Buesseler, leading the research from the US-based Woods Hole Institution, has warned that Fukushima fish "may be inedible for a decade,” according to the Guardian. They found "elevated levels" of radiation in the marine environment, and cited that 40 percent of the fish caught near the nuclear plant were contaminated with radioactive caesium above government safety limits.

Meanwhile, in the US, the debate continues over the safety of seafood from the Gulf of Mexico nearly three years after BP's offshore rig exploded, dumping some 4.9 million barrels of oil into the ocean. Not to mention the two million gallons of dispersants used to clean up the spill that were up to 52-times more toxic than the oil itself.

"Dispersants are preapproved to help clean up oil spills and are widely used during disasters," said UAA's Roberto-Rico Martinez, who led the study. "But we have a poor understanding of their toxicity. Our study indicates the increase in toxicity may have been greatly underestimated following the Macondo well explosion."

According to their studies, mixing the dispersant with the oil increased the toxicity of the mixture, which was shown to increase the mortality of rotifers in lab tests, the microscopic grazing animal at the base of the Gulf's food web.

The good news? After this week's Gulf of Mexico Oil Spill & Ecosystem Science Conference in New Orleans, the Times-Picayune reported:

“The seafood safety issue has remained a bone of contention for some fishermen and coastal residents who have reported finding either deformed fish or evidence of hydrocarbons in shrimp or oysters. But Robert Dickey, director of the FDA Gulf Coast Seafood Laboratory and the agency's Division of Seafood Science and Technology, insists that the testing conducted in the aftermath of the spill, the most comprehensive in the history of the agency, continues to show that commercial seafood is safe to eat.”