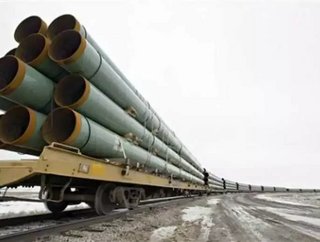 According to TransCanada&#39;s figures, should the Keystone XL pipeline be approved, over half a million permanent jobs would be created&mdash;a misle...

According to TransCanada's figures, should the Keystone XL pipeline be approved, over half a million permanent jobs would be created—a misleading figure at best.

A report released this week from the State Department, however, estimates much smaller figures. In addition to downplaying the environmental concerns of the construction of the pipeline, it estimates that the project would only create 42,100 jobs during the construction phase of one to two years, which would then diminish to a mere 35 permanent position thereafter for maintenance and inspections.

The long partisan debate over the subject has notoriously floated a plethora of confusing jobs numbers (see chart below).

"Completion of the Keystone XL Pipeline extension will bring over 1.4 million barrels of oil per day into U.S. markets and create more than 100,000 American jobs," House Energy and Commerce Chairman Fred Upton (R-Mich.) said in 2011.

But would the proposed pipeline actually have a significant impact on the US oil market, considering that the majority of the oil that would reach refineries in Texas would be located in free trade zones in the Gulf where supplies could be shipped off to foreign buyers (without paying US taxes)?

“...it will divert tar sands from the Midwest to the Gulf, raising American oil prices and likely also gasoline prices,” the NRDC's Susan Casey-Leftkowitz writes. “An Oklahoma to Texas tar sands pipeline will mean more tar sands converted to diesel and available for export overseas. It will mean less tar sands remaining in the US, even while Americans bear the risks of the pipeline.”