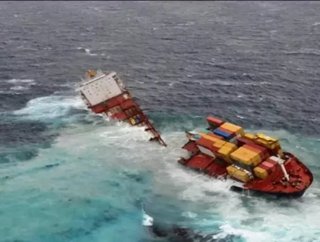 After a ship split in two struck from extreme overnight weather, a &ldquo;light&rdquo; oil spill now stretches some two miles off the coast of New Zea...

After a ship split in two struck from extreme overnight weather, a “light” oil spill now stretches some two miles off the coast of New Zealand. Though the spill was minor in comparison to the 400 tons of fuel oil spilled in October in the country, preventable slip ups involving poor infrastructure and short-cutting are becoming more commonplace in the oil industry.

In October, New Zealand's worst environmental maritime disaster in its history happened on account of a vessel that ran aground. This time, a cargo ship merely fell apart and split in two due to some bad weather, despite the use of hi-tech equipment that allows ships to predict such approaching conditions.

In other parts of the world, poor weather conditions are faced with the same Titanic-like attitude, as oil companies demand operations to force their way through dangerous waters with unwavering invincibility and a lazy approach to safety precautions. Last month, a Russian oil rig capsized in extreme weather maritime conditions, resulting in the deaths of dozens. Shell, too, messed up in a incident loading a tanker off the coast of Nigeria, causing one of the country's worst oil spills in the last decade.

All this occurred within a matter of a few months. Oil companies are quick to apologize and assure the media that cleanup will be strategically managed, but there seems to be a lack of that same rhetoric regarding that mindset before the incidences took place. If history has taught us anything—especially after last year's Deepwater Horizon disaster—it's that safety is not a priority in the oil industry's offshore drilling or transportation operations.