LNG may be used to power heavy hauler trucks 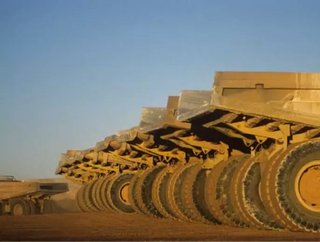 Shell Canada and Caterpillar have signed an agreement to test a new engine and fuel mix using liquefied natural gas (LNG) that could reduce operating costs and lead to reduced emissions from oil sands mining in northern Alberta.

Caterpillar will leverage its experience with LNG in other applications, and will continue development work to design and build a fully integrated mining truck where LNG displaces most of the diesel power - also known as dual fuel. Through this agreement, Caterpillar will test the design at Shell's oil sands operations located near Fort McMurray.

In addition to the new truck Caterpillar is developing, Shell will also retrofit existing trucks from its fleet with the new engine for the trial, as well as provide fuelling infrastructure, at its Shell Albian Sands operation near Fort McMurray. This trial follows a trend for Shell in looking at options to use Canada's abundant natural gas as a fuel in marine and road transportation, and other industrial situations.

"To succeed commercially in the future, we believe we have to be able to compete both economically and environmentally. We believe that is what Canadians want," said Shell's VP, Oil Sands, John Rhind. "With heavy hauling being such a core part of our operation, success with this could make a real difference in our operations costs and emissions."

Field testing of dual fuel powered mining trucks at Shell's oil sands operations is expected to begin in 2016, with the trial expected to last up to one year.

"We are excited to collaborate with Shell on this latest initiative to power Cat mining trucks with Caterpillar's LNG technology," said Chris Curfman, Caterpillar vice president with responsibility for Mining Sales & Support Division.