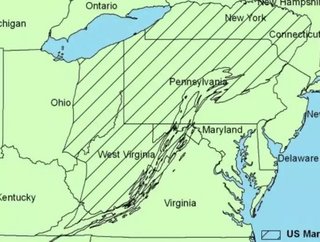 The Marcellus Shale has reinvigorated the economies of the northeastern United States with newfound wealth in natural gas. All the major oil and gas co...

The Marcellus Shale has reinvigorated the economies of the northeastern United States with newfound wealth in natural gas.  All the major oil and gas companies—ExxonMobil, Chevron, Shell—not to mention mining giants like BHP Billiton, have been claiming their stakes on Marcellus shale land through acquisitions and mergers.  It looked like shale natural gas was to be the saving grace of America’s energy economy; that is until the United States Geological Survey released its new report.  The group has found that the Energy Information Administration (EIA) has grossly overestimated the amount of natural gas resources available in the Marcellus Shale formation.

Federal geologists claim that there are only 84 trillion cubic feet of technically recoverable natural gas in the Marcellus Shale formation compared to the former estimate of 410 trillion published earlier this year by the EIA.  The EIA has now agreed to reduce its official resource estimate by 80 percent based on the Geological Survey’s new findings.

The EIA is responsible for quantifying oil and gas supplies, but there has been growing concern from Congress as to how exactly the Administration goes about calculating its data.  The EIA reportedly depends highly on outside input from industry consultants, which may produce biased figures.

In July, EIA Director Howard K. Gruenspecht appeared before congress to quell any worries about resource estimates, arguing that his EIA’s figures were accurate.  Now, the Administration is apparently retreating on its word, and downgrading the estimates dramatically.

Nonetheless, the new Marcellus Shale natural gas resource estimates are still higher than the U.S. Geological Survey’s previous study in 2002, which predicted that only 2 trillion cubic feet of recoverable resources were present in the shale formation.  This estimate, however, was released prior to new hydraulic fracking drilling technology increasing access to hard-to-reach reserves.