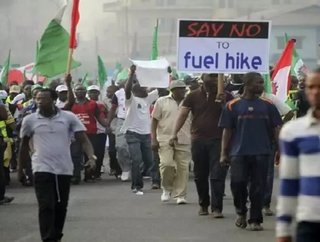 As fuel prices spiral out of control in Nigeria, a union of some 20,000 oil and gas workers threatened to shut down all production starting Sunday. Fo...

As fuel prices spiral out of control in Nigeria, a union of some 20,000 oil and gas workers threatened to shut down all production starting Sunday. For two decades, the government ran a popular subsidy program that kept prices low for local consumers, but in reversing that program Monday, many fear they will no longer be able to afford the costs of fuel.

Anger and violence over the issue has already led to at least ten deaths as thousands march in protest. According to a statement Thursday by the Petroleum and Natural Gas Senior Staff Association of Nigeria, if the government does not act, the union will be “forced to go ahead and apply the bitter option of ordering the systematic shutting down of oil and gas production.”

Gas prices more than doubled instantly, making transportation and food costs even more strenuous on a country where most live on less than $2 a day. For Africa's most populous nation, oil accounts for 80 percent of its revenues, but what do the people see of it?

The president claims that the removal of the subsidy will help save the country an estimated $8 billion a year, which will go towards infrastructure and public projects. However, the people continue to shout “corruption.”

In the meantime, Lagos' busy Apapa Port has been closed off and all international air carriers canceled. Benchmark oil prices are skyrocketing this week in electronic trading on the New York Mercantile Exchange as concerns of global supplies grow. Production forecasts from Nigeria are expected to be adjusted over the next week as we watch what happens...