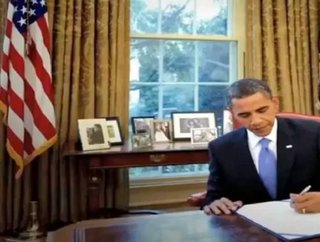 Despite fierce opposition from Republicans after a decision to reject a permit on the Keystone XL pipeline, President Barack Obama&#39;s first tele...

Despite fierce opposition from Republicans after a decision to reject a permit on the Keystone XL pipeline, President Barack Obama's first television ad for his 2012 re-election campaign discredits his opponents' attacks.

The ad notes that America's clean energy industry is expanding rapidly with over 2.7 million new jobs in place and counting. Additionally, “For the first time in 13 years, America's dependence on foreign oil is below the 50 percent mark,” according to the clip:

Without mentioning the Keystone XL pipeline, Republicans see the ad as defensive as it airs in the electoral battlegrounds states of Iowa, Michigan, North Carolina, Ohio, Virginia and Wisconsin.

"Instead of addressing jobs in his first campaign ad, he’s on defense about failed promises on energy," RNC spokesman Kirsten Kukowski said Thursday in a statement referencing the Keystone XL pipeline decision.

The Keystone XL pipeline would cost a proposed $7 billion to supply about 700,000 barrels of oil per day (bpd) out of about 20 million bpd needed to meet current demand in the US alone. So, the pipeline would only bring in about 3-4 percent and is not likely to drive down oil prices.

Meanwhile, the Obama administration's decision to reopen the Gulf of Mexico since BP's disaster brought in some $337 million in bids in December's lease sale, permitting oil drilling operations in almost 200 tracts throughout the region. According to the Interior Secretary Ken Salazar, the administration's new five-year Outer Continental Shelf (OCS) program is expected to make over three quarters of undiscovered oil and gas resources available.